From U-Hall to the UAE

We spent last week moving out of the apartment that we’d occupied for the past ten academic years as Faculty Fellows in NYU’s University Hall residence. We’d had the benefit (read: the vice) of having a storage space in the basement, in to which we (read: I) had crammed not only our own stuff (including lots of disorganized memorabilia) but also things that we’d accumulated after cleaning out the apartments of my late grandmother and my late aunt several years ago. The place had become an archeological site.

Spouse was correct that I had radically underestimated the amount of time necessary to excavate us, though I maintain that it wouldn’t have been so bad if I had not had an unforeseen administrative task dumped on my during the week I’d plan to get ready for the movers.

Usually a move isn’t so bad if you have people coming to pack for you and move you out. Which we did. The problem was that we’re moving our things into storage and decided not to store extraneous things. Which meant that a lot of things needed to be given to charity or to friends or simply discarded. We did all of those things in the weeks leading up to the move. Just not enough.

Spouse and Kids decamped for a planned pre-expatration vacation in Barnegat Light on Long Beach Island down the Jersey shore while the movers were still carting out furniture and boxes at mid-day on Wednesday. But even after all of these were removed from the apartment … 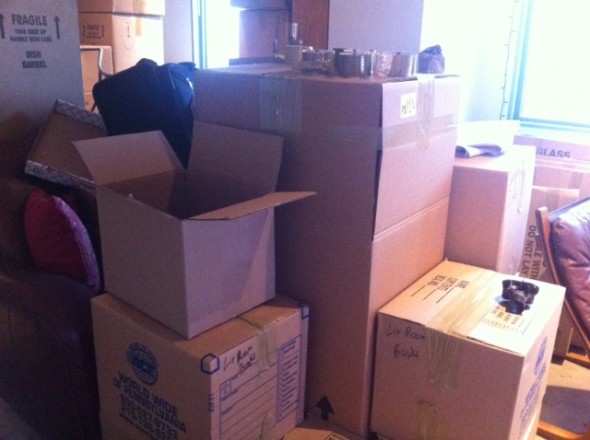 there were still quite an overwhelming number of things that needed to be thrown away or taken to my office (which therefore now currently resembles a storage space).

What did I learn in the 45 hours (48 minus the 3 I slept) that I subsequently devoted to this task? What did I realize when, to my chagrin, I was still carting out crap as workers arrived at the apartment to rip out the carpet and patch up the walls in preparation for painting?

That I really have to embrace what a colleague calls the OHIO principle (“only handle it once”) when it comes to dealing with paper (or e-mail messages for that matter). No more putting papers into piles marked “TO DO.” And no more keeping paper hanging around for that matter. All records to be scanned into PDFs, tagged, and suitably filed — except for the very few Significant Documents Needed for the Archive. (Yes, I realize that’s potentially a slippery slope, but I take heart from the fact that I have shipped no paper files to Abu Dhabi in advance of the move — and I’m not carrying files with me either.)

And, yes, it was very liberating to rifle through a box of documents from 2004 quickly and then just dump them all — kit and kaboodle — into a recyling bin. (Okay, maybe I pulled a paper or two from the kit and one or two more from the kaboodle.)

I’m sure there are papers that I chucked that I would have kept had I seen them. But what I don’t know doesn’t hurt me. And I’m sure that possessions that I intended to save have probably gone the way of all things in those frantic final hours. I’m chalking all of that that up to the cost of doing business — and the business I’m now in is this: living a simpler and more deliberate life, less burdened by stuff and the ties to the past that stuff represents for me. (Although it was cool to be able to haul an actual rock taken from Mt. Vesuvius in 1984 when my younger son started asking about the volcano and its history.)

Yes, I go to the desert because I wish to live deliberately, to front only the essential facts of life, and see if I can not learn what it has to teach, and not, when I come to die, discover that I had not lived. Going to Abu Dhabi is my version of going to Walden Pond. And although, unlike Henry, I get to take my wife and kids and earn many frequent flyer miles, the comparison is more apt than you might think.