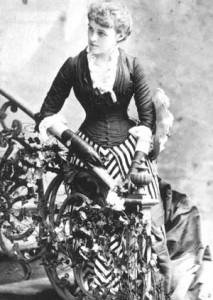 This morning I was giving a lecture in my Writing New York class on Edith Wharton’s The Age of Innocence (1920), and I was framing it with a discussion of the genre of the novel of manners. We adopt an expansive idea of the genre in the course, including not only predictable examples such as Henry James’s Washington Square (1880) and Wharton’s novel, but also Stephen Crane’s Maggie and Abraham Cahan’s Yekl (1896), with nods back to the plays we read earlier in the term: Royall Tyler’s The Contrast (1787), Benjamin Baker’s A Glance at New York (1848), and Anna Cora Mowatt’s Fashion (1848).

I was explaining how the category of “manners” means more than simply “good manners” and “good taste,” that it signifies the mores, customs, and social codes that bind a group together. “Manners” are therefore a system of social regulation designed to designate who the insiders are and who the outsiders are — and often the inculcation of “good manners” and “good taste” are part of the process of teaching people to become insiders.

I’m invoking Lionel Trilling and Pierre Bourdieu, likening the novel of manners to Shakespearean comedy and to detective fiction — and basically I’m on a roll.

And then I hear the crinkling of paper. Out of the corner of my eye I notice a young woman in one of the front rows pulling her breakfast out of a paper bag. Loudly. And for quite a while.

The noise stops, but it’s soon replaced by another: nose-blowing. Loud nose-blowing. I slow down; the nose-blowing continues, and there are some snickers from the audience. I ask a question so that there is silence. Except for the silence. And a few more snickers.

I continue. Eventually the nose-blowing stops.

A little later, I give a sidelong glance in the young woman’s direction. She is surveying something on her Blackberry.

I’m generally not bothered by students who aren’t giving me their full attention, though (as any lecturer will tell you) I can see basically everything that’s going on out there. But there are limits.

If only she’d been listening.