The crystal skull that serves as the MacGuffin in the new Indiana Jones film is a “highly magnetized object” that attracts all kinds of metal.

This morning, I discovered that The Crystal Skull has similar properties. Leaving my building, I had every intention of turning right and heading to the gym. But, like the film’s Professor Oxley (played by John Hurt), I could hear the Skull beckoning: “Return!” I found myself turning left and heading to the 11:30 showing at the AMC Loew’s 19th Street, returning there a mere nine hours after I’d left. (This is the quickest I’ve ever been back to see a movie a second time.)

Was Indiana Jones and the Kingdom of the Crystal Skull worth watching a second time? For me, the answer was an emphatic, Yes! Indeed, I found myself fonder of the movie after the second time through. 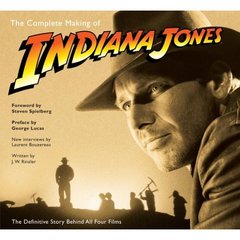 In the recently released volume The Complete Making of Indiana Jones by Laurent Bouzereau and J. W. Rinzler (Ballantine Books), Steven Spielberg is quoted as saying: “I want people to come to this movie and say, ‘Oh, my old friends are back. And one of their friends will be the style in which we shot the previous films. I want audiences to come to this movie and make new friends, but rediscover that their old friends haven’t changed all that much.”

That’s exactly how I feel about this movie.