Thirty-five years ago today, I embarked a trip around the world. My parents had given me the plane ticket as a present after my college graduation, and I had saved money for expenses out of prize money awarded to my senior thesis on Finnegans Wake and from six months of working as a programmer for IBM. (I used to work as a programmer each summer after college. I loved doing something that was different from literary study for a while each year. My father always said that I did the wrong Ph.D.)

The first fourteen weeks of the trip were structured around destinations in Asia and the Middle East where I knew people: a family friend in Beijing, relatives in Pakistan and the Philippines, and a college friend doing a Fulbright in Cairo. Between those major destinations, I would spend a few days in places I simply wanted to visit: Tokyo, Hong Kong, Delhi, Istanbul. The second half of the trip would take place in Europe, where I’d be traveling with my college girlfriend S. and then my sister. Itinerary relatively open, but S. and I would be meeting in Paris.

I’m something of an archivist (or “packrat,” my wife would say), and I’ve recently unearthed two notebooks from the trip (a third, alas, was left in the seat pocket of a train) and digitized all of the slides that I took during the trip. I plan to revisit those materials here in the coming months, reflecting on the trip and the changes that the intervening years have wrought both on me and on the places I visited. 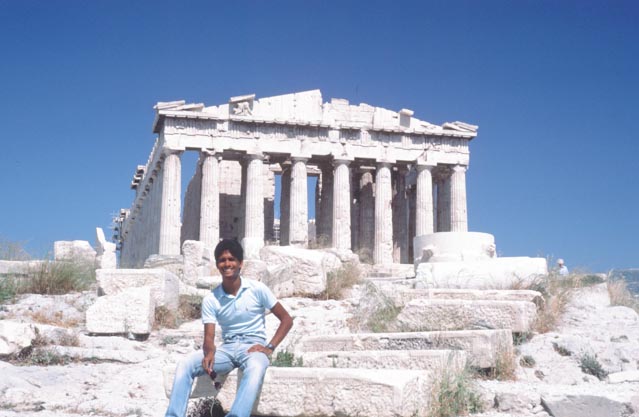 My attitude throughout the trip was that I didn’t have to “see” everything. I considered these visits to be initial forays; I was sure I’d be back in the years to come. Alas, the budget and the work schedule of the graduate student and then a young professor in literary studies didn’t accommodate as much travel as I had hoped. Some places I visited again relatively soon; some I’ve just revisited recently from my current base in Abu Dhabi; and some I’ll be seeing again soon. Many places I have yet to return to. But hey, as the poet said, I still have miles to go before I sleep. With luck, some of those will be frequent flyer miles.

In any case, if I close my eyes and concentrate, I can picture  that massive gray convertible nylon backpack with the internal frame that I schlepped around for those seven months. Thirty years ago today, I had it on my back as I arrived at my first destination: San Francisco. The first entry in the first journal is dated “February 21, 1984.” Tomorrow I’ll revisit it.