Cosmopolitanism and the Liberal Arts

It was great fun speaking on this subject last Friday at Harvard. Thanks to everyone who came to me over the next couple of days to talk further about cosmopolitanism and its implications.

Below is an approximation of what I said. I would love to hear from anyone who has further thoughts or questions about the topic. Leave a comment below or drop me a line at my NYU e-mail address. 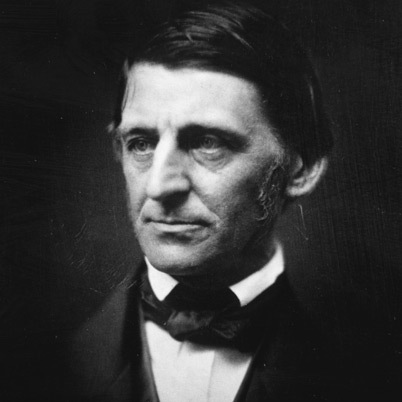 Ralph Waldo Emerson, American philosopher and Harvard alumnus, once wrote that “Power ceases in the instant of repose; it resides in the moment of transition from a past to a new state, in the shooting of the gulf, in the darting to an aim.” I’m going to talk to you today about the virtues of shooting across gulfs and crossing boundaries—boundaries of nationality, race, class, gender, sexuality, language and—let me stress this—academic discipline.

I’m a literary scholar by trade, but I’ve always been interested in the intersections between literary study and other disciplines. One of my favorite courses among those I’ve been teaching lately is called “The Cosmopolitan Imagination.” It asks students to think about why it is the human beings tell stories and what constitutes so-called “great literature.” 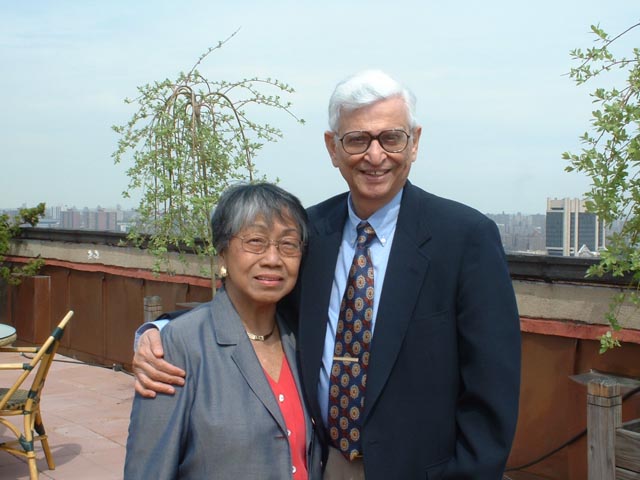 My parents, Estrella and Rusi Patell.

My parents were boundary-crossers by virtue of their coming from Asia to the United States and eventually marrying one another. My father is a Parsee, born in Karachi, when Karachi was a part of India. My late mother was a Filipino. They had met at the International House at Columbia University, my father coming to study mathematical statistics, my mother to study literature and drama.

In matters of religion, however, they were fairly conventional. They weren’t active believers, though we did attend dinners that were held to mark the Zoroastrian New Year (at least until those dinners were moved to Westchester) and we did celebrate Christmas, making it a point to attend the Christmas Eve services at Riverside Church, in New York, a few blocks up the street from where we lived. My mother sometimes liked to attend Easter services there as well.

“We kept hearing excuses along the lines of, “I would do it, but my mother-in-law is very old-fashioned.” The problem was that my mother was a Christian.”

It was always assumed that I would have a religion and furthermore that I would become a Zoroastrian like my father. As my mother explained it, it was so that I could keep my options open. I could convert to Christianity, but not to Zoroastrianism, because Zoroastrianism didn’t accept converts. But, when the time came during third grade for my navjote ceremony to be performed, we couldn’t find a priest. We kept hearing excuses along the lines of, “I would do it, but my mother-in-law is very old-fashioned.” The problem was that my mother was a Christian.

Finally, we managed to secure the services of a priest from Mumbai who was traveling in the U.S. and spending some time in New York. Four years later, we had to go to London to have my sister’s ceremony done. And then, there were moments during the preparation for the ceremony when my aunt had to deputize for my mother, because Christians weren’t allowed in certain areas of the Zoroastrian temple. 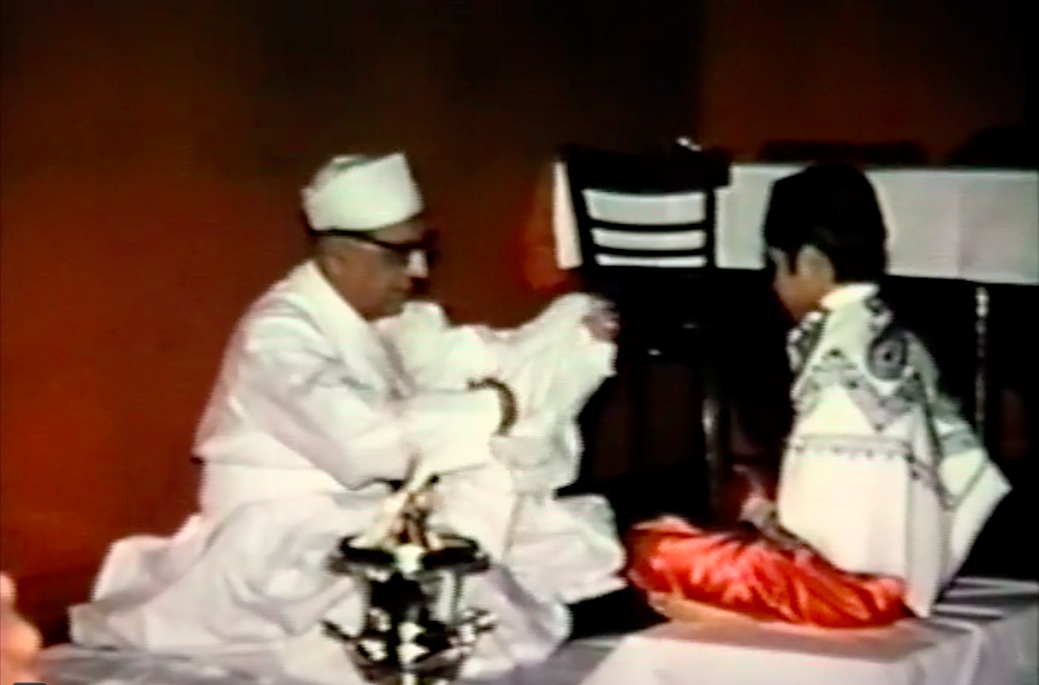 I’ve told this story many times at NYU Abu Dhabi, where I’m teaching these days, often at the admissions weekends when we meet and evaluate prospective students who have come from all over the globe. For those of you who have never heard of it, NYU Abu Dhabi was New York University’s first portal campus, a degree-granting unit of the university located in the capital city of the United Arab Emirates. Now in its fourth year, NYU Abu Dhabi is a globalized liberal arts college that also offers engineering; it’s intended ultimately to be about the size of Swarthmore with about 2,000 or so undergraduates. With four classes totaling about 600 students presently enrolled, NYU Abu Dhabi’s student body comes from 102 nations and speaks 98 languages. It’s designed to take the global education that was implicit in what we all got at Harvard and make it explicit. 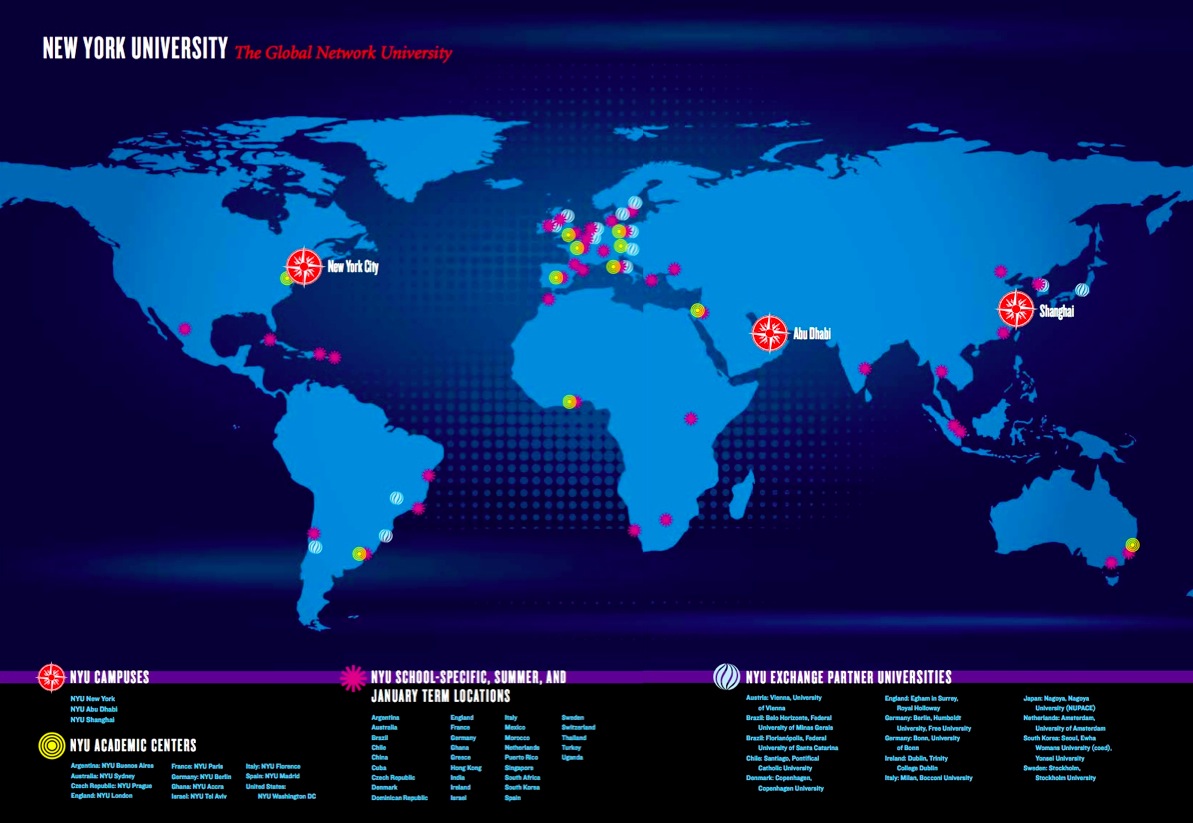 When my freshman roommate wanted to spend his junior year abroad at American University in Cairo, perfecting his Arabic and enhancing his understanding of the Middle East, he had to jump through hoop after bureaucratic hoop in order to get the year abroad set up and approved. The attitude that seemed to prevail was, “You’re at Harvard. Why would you want to spend time anywhere else?” Things are apparently different these days. According to the website for the College’s office of admissions, “about 60 percent of Harvard students integrate international experience into their undergraduate careers,” through “enrollment in a foreign university,” “enrollment in a program sponsored by another U.S. college or university,” “participation in field and experiential programs,” or “programs administered by Harvard Summer School.”

NYU is trying to go further, to create what the president of NYU, John Sexton, describes as a “global network university,” an integrated collection of campuses and study-away sites designed to counteract the parochialism that beset most U.S. universities in the second half of the twentieth century.

At NYUAD, I present my anecdote as example of parochialism, which taught me an early lesson in the dynamics of culture: my parents’ marriage was an emblem of cosmopolitan cultural mixing, while the priests’ belief in the importance of cultural purity served as an emblem of all the forces that are arrayed against cosmopolitanism. The term “cosmopolitanism” is used with great abandon in both New York and Abu Dhabi, often to denote a worldly perspective that involves a lot of travel and the cultivation of good taste. At NYUAD, we’ve tried to get the students to think more deeply about what a true cosmopolitanism actually entails.

The term “cosmopolitanism” has had something of a reboot in recent years. Derived etymologically from the Greek word cosmopolites, meaning “citizen of the world,” it was traditionally used to describe a form of universalism that was directly opposed to the idea of nationalism. But its meaning has shifted—away from universalism toward a more pluralist conception, one that is conceived not only in contradistinction to nationalism but also in contradistinction to universalism itself. Universalists try to find common ground amongst peoples; they want to be able to make generalizations that apply to all human beings. Cosmopolitans are more interested in human diversity. For universalists, difference is a problem to be solved. For cosmopolitans, it is an opportunity to be embraced.

The evolution of cosmopolitan theory owes something to the triumph of multiculturalism in the aftermath of the so-called “culture wars” of the 1980s. Multiculturalism led to the recovery of neglected histories and artistic traditions, and it fostered a greater sense of toleration (and even appreciation) for various kinds of difference.

Along with the gains, however, there were costs, including increasingly rigid ideas about identity politics and a reluctance to offer critiques of practices across cultural boundaries. Multiculturalism, as institutionalized in the U.S., often pushes its commitment to pluralism so far that we get a kind of cultural impasse. The result is a skittishness, a reluctance to speak across cultural boundaries.

When I tell this to students, they often nod their heads. Then I say, “So what do you do when one of those long-standing practices happens to be slavery? Is that okay? Don’t we want to be able to say something about another country’s long-standing practice of slavery?” That makes them think.

What I suggest to them is that cosmopolitanism gives us ways of respecting cultural boundaries but also of crossing them. The cosmopolitan experience is all about finding sameness across gulfs of difference, but it isn’t about eradicating gaps in cultural experience: rather, it’s about bridging them. 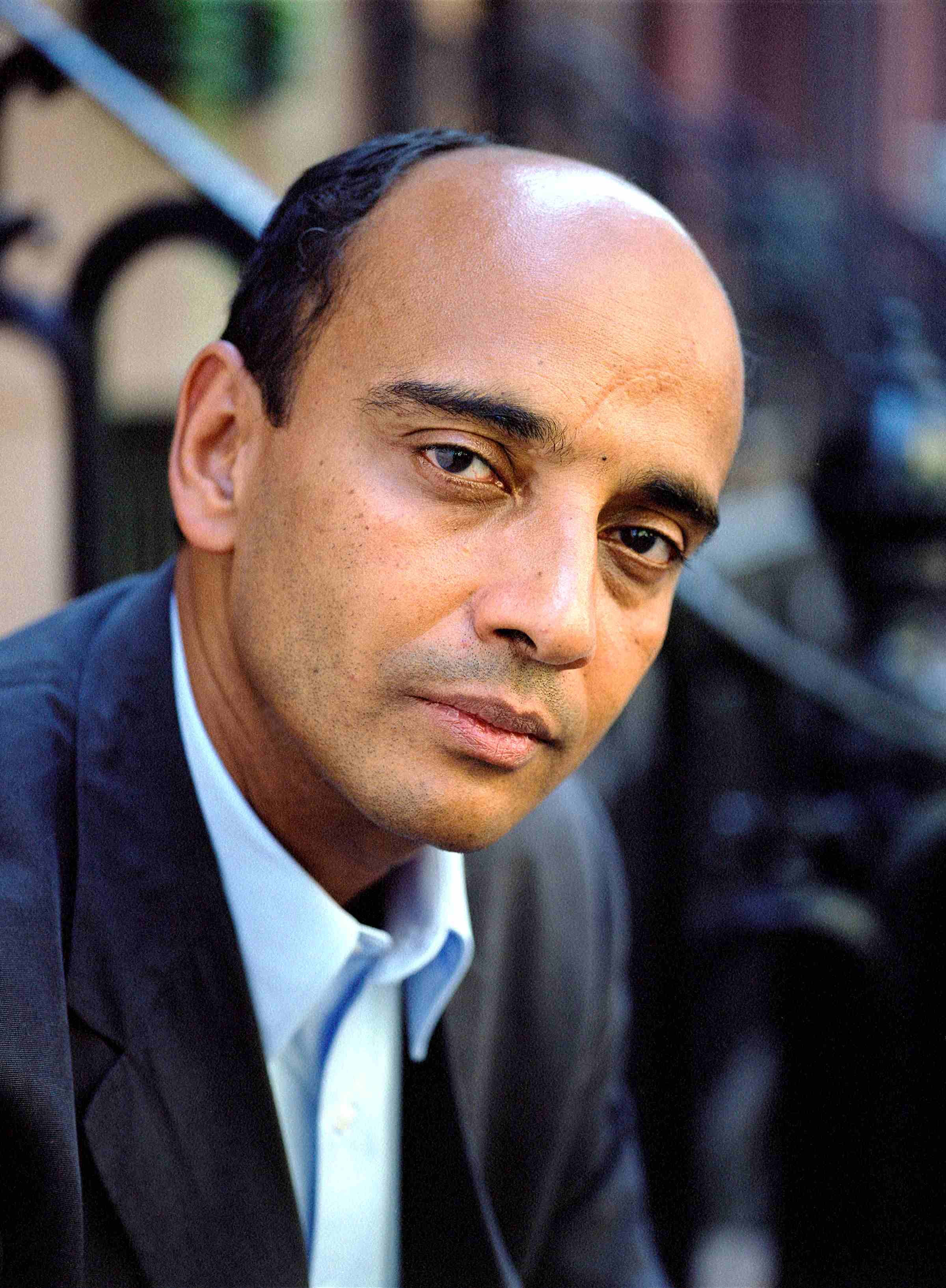 Theorists of cosmopolitanism like the philosopher Kwame Anthony Appiah stress the importance of conversation as the primary means through which such cultural bridges are built. Appiah invokes “conversation in its older meaning of living together, [of] association” as well as in “its modern sense” of simply talking with one another. The kinds of conversations that Appiah has in mind, however, are much more than simple chit-chat or the exchange of pleasantries. They are dialogues in which we are willing to put our central beliefs on the line: we commit ourselves to conversations in which we are willing to have our minds changed about cherished beliefs and values.

I’ve come to think about my own field—literary scholarship—in precisely these terms. In my NYU Abu Dhabi course called “The Cosmopolitan Imagination,” I ask students to think about whether the kind of cosmopolitan perspective I’ve been describing might be a hallmark of all “great” literature, which asks its readers to experience otherness by opening themselves up to another person’s words and thoughts. The promise of literature is that it takes us out of our own subjectivities and into the subjectivity of another. It enables us to experience different ways of thinking, different ways of being in the world, than those to which we are accustomed. And it’s in that meeting of minds that the so-called meaning of a literary text is produced. “Meaning” isn’t something that an author puts into a text to be decoded by its reader. It is instead, a collaborative production, the result of a “conversation” between a text’s author and its reader through the medium of the text. A text that’s never read doesn’t mean anything.

A well-designed liberal arts curriculum forces students to become critically aware of the complexities of meaning-making and knowledge-production. It relies not on distance learning but on close, face-to-face learning, at its best across seminar tables. It asks students to engage in cosmopolitan conversations—with their professors, with their readings, with their classmates—across divides of nationality, race, class, gender, sexuality, language and—academic discipline. It’s a good thing when engineering students are asked to take literature courses like mine that require them think outside of their comfort zones; it’s a good thing when literature majors have to take courses that require them to be in labs or to deal with numbers. 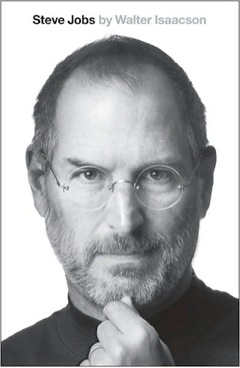 Talking to you here in this building that’s famously shaped like a Polaroid camera, reminds me something that Steve Jobs told his biographer Walter Isaacson: “I always thought of myself as a humanities person as a kid, but I liked electronics. Then I read something that one of my heroes, Edwin Land of Polaroid, said about the importance of people who could stand at the intersection of humanities and sciences, and I decided that’s what I wanted to do.”

Thinking and conversing across boundaries leads to innovation and creates citizens of the world. What a good liberal arts curriculum teaches students is that you don’t have to be a genius to find those intersections; you just have to be willing.