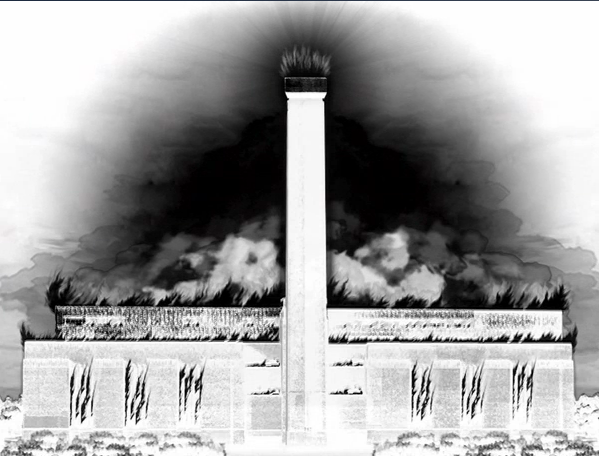 “The Try-Works” brings to a climax the sequence of chapters devoted to the transformation of the whale’s body into a commodity for human consumption. Ishmael’s descriptions of the try-works — the huge pots into which the blubber is boiled down into oil — are tinged with dire religious images of burning martyrs, funeral pyres, hellfire: images of hellfire and  religious judgment:

Like a plethoric burning martyr, or a self-consuming misanthrope, once ignited, the whale supplies his own fuel and burns by his own body. Would that he consumed his own smoke! for his smoke is horrible to inhale, and inhale it you must, and not only that, but you must live in it for the time. It has an unspeakable, wild, Hindoo odor about it, such as may lurk in the vicinity of funereal pyres. It smells like the left wing of the day of judgment; it is an argument for the pit.

The chapter continues the association of Ahab with fire, first begun in the chapter that bears his name, when Ishmael describes Ahab’s scar by comparing it to the scoring of a tree by lightning. The harpooneers — Ahab’s consecrated whale hunters — seem even more savage when the try-works are ablaze. This passage is one of my favorite in the book:

As they narrated to each other their unholy adventures, their tales of terror told in words of mirth; as their uncivilized laughter forked upwards out of them, like the flames from the furnace; as to and fro, in their front, the harpooneers wildly gesticulated with their huge pronged forks and dippers; as the wind howled on, and the sea leaped, and the ship groaned and dived, and yet steadfastly shot her red hell further and further into the blackness of the sea and the night, and scornfully champed the white bone in her mouth, and viciously spat round her on all sides; then the rushing Pequod, freighted with savages, and laden with fire, and burning a corpse, and plunging into that blackness of darkness, seemed the material counterpart of her monomaniac commander’s soul.

Ishmael’s account replays the scene of “The Quarter-Deck” with its unholy oath, as Ishmael finds himself once again caught up in his shipmates’ moments of madness:

So seemed it to me, as I stood at her helm, and for long hours silently guided the way of this fire- ship on the sea. Wrapped, for that interval, in darkness myself, I but the better saw the redness, the madness, the ghastliness of others. The continual sight of the fiend shapes before me, capering half in smoke and half in fire, these at last begat kindred visions in my soul, so soon as I began to yield to that unaccountable drowsiness which ever would come over me at a midnight helm.

That drowsiness nearly leads to a disaster, but now is not the time for disaster. The chapter ends with a caution: “Look not too long in the face of the fire, O man!” Ishmael looked too long and barely escaped. Ahab, we will discover, looked too long as well.

“The Try-Works” is read by Mark Ashurst   The illustration is a video (still shown above) called It is You I Love the Most (2005) by Mark Titchner. Visit the “Big Read” site to watch it.