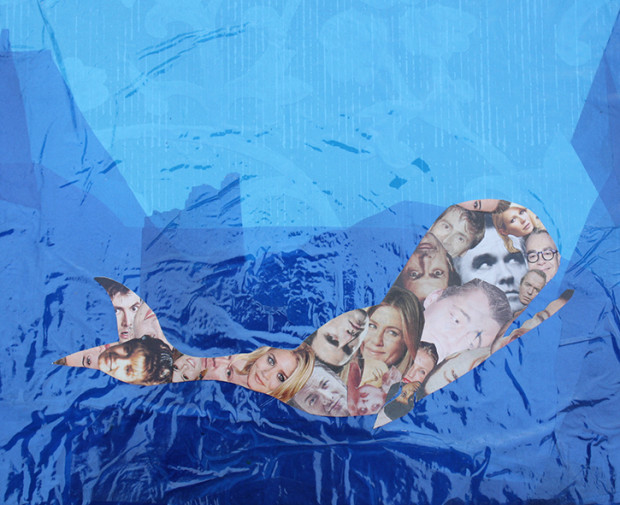 “Fast-Fish and Loose-Fish” becomes a crucial chapter when I’m lecturing on Moby-Dick, because I use it to demonstrate that the novel is interested in some of the most pressing political issues of its day, including slavery, manifest destiny, and economic oppression. Ishmael’s narrative mode here should remind us of the satires of Jonathan Swift, particularly as the chapter comes to its climax.

Remember that at the end of “The Grand Armada” chapter, the Pequod leaves behind a “waifed” whale, while it continues the hunt. A waifed whale is one in which a ship has left its pole, or “waif,” as a mark of ownership. The term is appropriate because the waifed whale exists in an in-between state, no longer a member of the society of the sea (or of the living, for that matter), but not yet taken up by the ship for processing.

Ishmael tells us that whale that has had a “waif” implanted in it is a “fast-fish.” The difference between a fast-gash and a loose-fish” seems, on the surface, to be simple:

I. A Fast-Fish belongs to the party fast to it.

II. A Loose-Fish is fair game for anybody who can soonest catch it.

Ishmael then elaborates upon the definition of a “Fast-Fish”:

Alive or dead a fish is technically fast. when it is connected with an occupied ship or boat, by any medium at all controllable by the occupant or occupants, – a mast, an oar, a nine-inch cable, a telegraph wire, or a strand of cobweb, it is all the same. Likewise a fish is technically fast when it bears a waif, or any other recognised symbol of possession; so long as the party waifing it plainly evince their ability at any time to take it alongside, as well as their intention to do so.

What’s interesting about the definitions that ishmael gives us is that they frame the discussion of whales in a particular: they assume that whales are a possession waiting to be claimed. A “loose-fish” is only a “fast-fish” that hasn’t been caught yet. The “loose-fish” isn’t described, in other words, as a fish that’s “free.” It’s described as a fish that hasn’t been caught.

In class, I typically use these definitions as a way of thinking about the idea of “freedom” itself, noting that the US liberal tradition of political philosophy typically adopts a “negative” conception of “freedom” as freedom from constraint or oppression. A “positive” conception of freedom, in contrast, imagines not “freedom from” but rather “freedom for” or “freedom to”: freedom isn’t freedom until it’s exercised positively. (The classic account of this distinction is Isaiah Berlin’s essay “Two Concepts of Liberty.”)

What’s disturbing about the negative description of freedom is that its self-definition relies on constraint and oppression: you have to have already conceived of constraint as an undesirable state in order to conceive of freedom in this way. Freedom, in other words, is always predicated on a fear of oppression. Theorists of rights typically think of rights as guaranteeing a “sphere of immunity” within which an individual is safe from the incursions of others. Freedom is thus framed by constraint, just as Ishmael’s definition of a loose-fish is framed by the idea of being made fast.

This chapter is all about property, possession, domination, and conquest. Ishmael finally comes to believe that the maxim “possession is half of the law” is effectively replaced in practice by the fact that “possession is the whole of the law” and that “how a thing came into possession” is essentially irrelevant. The chapter presents a jaundiced view of human relations, suggesting that might makes right, in matters of whale-hunting, economic exchange, religious conversion, and imperial expansion:

What’s worse, Ishmael would have us believe, is that “if the doctrine of Fast-Fish be pretty generally applicable, the kindred doctrine of Loose-Fish is still more widely so. That is internationally and universally applicable.” He points to episodes of conquest and expansionism in Western history:

What was America in 1492 but a loose-fish, in which Columbus struck the Spanish standard by way of waifing it for his royal master and mistress? What was Poland to the Czar? What Greece to the Turk? What India to England? What at last will Mexico be to the United States? All Loose-Fish.

But our narrator doesn’t stop there, with this dig at the idea of Manifest Destiny. Instead, he asks us to contemplate for a moment, the ways in which we – his readers – are involved in structures of domination. To what extent are we “fair game for anybody who can catch us,” fair game for any idea, or ideology, or philosophical argument, or literary text? To what extent are we already caught – already fast-fish – without our even knowing it?

What purpose is served by forcing the reader into a moment of self-consciousness at the end of the chapter? Has Ishmael “waifed” us? Is he paying out line only to reel us in later?

“Fast-Fish and Loose-Fish” is read by Jane Sharp. The illustration, Moby-Dick (2012; collage: magazines, florists plastic & wallpaper), is by Jessica Voorsanger.