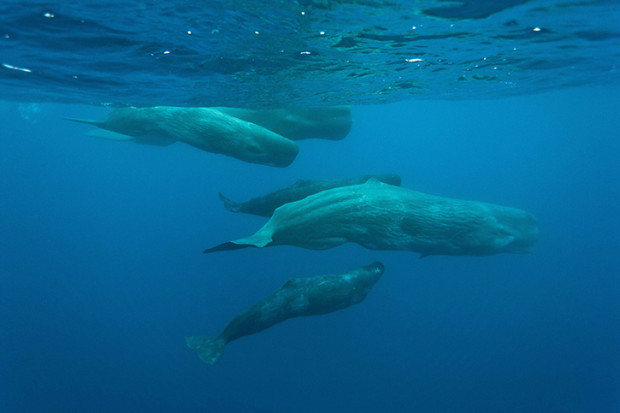 “The Grand Armada” finds the Pequod near the islands of “Sumatra, Java, Bally, and Timor” about to “emerge into the China seas.” Ahab’s plan is to use the “straits of Sunda”

to pass through them into the Javan sea, and thence, cruising northwards, over waters known to be frequented here and there by the Sperm whale, sweep inshore by the Philippine Islands, and gain the far coast of Japan, in time for the great whaling season there. By these means, the circumnavigating Pequod would sweep almost all the known Sperm Whale cruising grounds of the world, previous to descending upon the Line in the Pacific; where Ahab, though everywhere else foiled in his pursuit, firmly counted upon giving battle to Moby Dick, in the sea he was most known to frequent; and at a season when he might most reasonably be presumed to be haunting it.

Ahab’s single-mindedness, however, is simply an exaggerated version of the single-mindedness of the whaleship, which carries no “alien stuff, to be transferred to foreign wharves.” Instead, “the world-wandering whale-ship carries no cargo but herself and crew, their weapons and their wants.” As a result, “while other ships may have gone to China from New York, and back again, touching at a score of ports, the whale-ship, in all that interval, may not have sighted one grain of soil; her crew having seen no man but floating seamen like themselves.”

Ahab’s desire to seek revenge on one particular whale — to restore his place at the top of the food chain by killing the beast that tore away and perhaps ate his leg — is likewise simply a version of what the whaling industry as a whole seeks to do: to establish the domination of humankind over all of nature, including the largest creatures of them all.

Liberal theorists like John Locke describe the way in which human society depends on the exchange of commodities to create economic value. In Locke’s view (which C. B. Macpherson famously described as a theory of “possessive individualism”), private property exists because human beings are born with a piece of property: their bodies and with them the ability to labor. Mix labor with nature, and you create more property. In “The Grand Armada” and in the later chapters that describe the literal boiling down of the whale into whale oil, Moby-Dick investigates the shocking brutality of what it means to dominate and commodify nature.

After a close encounter with Malay pirates, the Pequod comes upon a gigantic herd of whales, and Ishmael’s prose waxes rhapsodic, before it is interrupted by an imaging of shocking violence and slaughter. Unlike the Spanish Armada, to which the title probably alludes, these whales do not seek conflict; they become aggressive only when attacked. The intrusion of the Pequod into the herd leads it to be come “gallied,” agitated in the extreme so that the herd ceases to advance in the water, with many of its members swimming frantically in circles.

It’s an opportunity the Pequod cannot pass up. Ishmael frankly tells us that “sperm Whales are not every day encountered; while you may, then, you must kill all you can. And if you cannot kill them all at once, you must wing them, so that they can be afterwards killed at your leisure. So the Pequod uses a device called a “drug” made of “two thick square of wood” that is harpooned into the whale and serves as a kind of ball and chain that will exhausted the whale so that the ship can later hunt it down and kill it.

Despite the ship’s murderous intent, the scene of agitated whales swimming in concentric circles around a calm center leads Ishmael to an allegorical moment, in which he likens himself to the peaceful pod of whales:

But even so, amid the tornadoed Atlantic of my being, do I myself still for ever centrally disport in mute calm; and while ponderous planets of unwaning woe revolve round me, deep down and deep inland there I still bathe me in eternal mildness of joy.

I once asked a graduate student during an oral exam about the depiction of families in Moby-Dick, which confused her until I reminded her that this chapter contains a depiction of “young Leviathan amours in the deep” and “the forms of the nursing mothers of the whales, and those that by their enormous girth seemed shortly to become mothers.” But domesticity can only be fleeting inside this novel, and the domesticity of this “enchanted pond” is soon interrupted.

Looking into the water, Queequeg mistakes “the umbilical cord of Madame Leviathan” that attaches babies to their mothers for the whale line, and Ishmael conflates these images further by noting, “Not seldom in the rapid vicissitudes of the chase, this natural line, with the maternal end loose, becomes entangled with the hempen one, so that the cub is thereby trapped.” In an even more disturbing conflation of images, Ishmael is reminded in a footnote (read at the end of the chapter) that when “by chance” the mother whale’s breasts “are cut by the hunter’s lance, the mother’s pouring milk and blood rivallingly discolor the sea for rods. The milk is very sweet and rich; it has been tasted by man; it might do well with strawberries.”

There’s still more violence: the devastating potential of the whale line is realized when a stricken whale runs amuck with a cutting spade trailing loose: “Tormented to madness, he was now churning through the water, violently flailing with his flexible tail, and tossing the keen spade about him, wounding and murdering his own comrades.” We see here sinister potential depicted earlier in the chapter called “The Line” come to fruition, as if the line itself lie beyond full human control. It’s not the last time that the use of the line will have unintended effects.

“The Grand Armada” is read by author Gordon Weiss. The illustration, Sperm whale babysitting, Pico, The Azores (2011) is by Andrew Sutton.