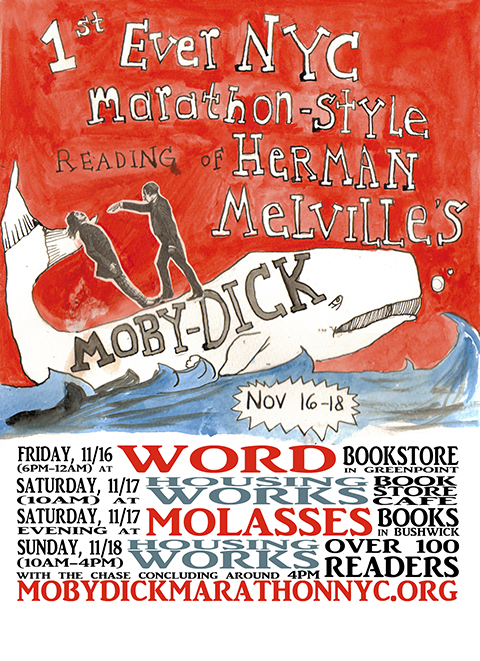 Meanwhile, back in my hometown, 160 intrepid readers are getting together for the first-ever New York City-based Moby-Dick marathon this weekend.

Here’s what the New York Times had to say about the event:

Beginning Friday evening, though, more than 160 New Yorkers are giving it a shot — out loud and in succession. Amanda Bullock, the director of public programming at the AIDS advocacy group Housing Works, and Polly Bresnick, a writer and teacher, have organized a marathon-style reading of the Melville masterwork. It will unfold over three days at three independent bookstores — Word, in Greenpoint, Brooklyn; Housing Works Bookstore and Café, in SoHo; and Molasses Books, in Bushwick, Brooklyn. While there are other “Moby-Dick” marathons each year around the country, with bearded, bespectacled acolytes flocking to seaside ports, sipping from thermoses of grog and readjusting their sweaters at the podium, this, organizers say, is New York City’s first. And it includes local actors (Paul Dano, Zoe Kazan), authors (Sarah Vowell), visual artists, journalists, critics and assorted Melville fans who responded to an open Twitter call. (Ms. Bullock lovingly referred to the roster as a “nerd fest.”)

Check out the marathon’s website: http://mobydickmarathonnyc.org/. The groovy poster is by Bianca Stone and Paul Tunis. Wish I could be there!