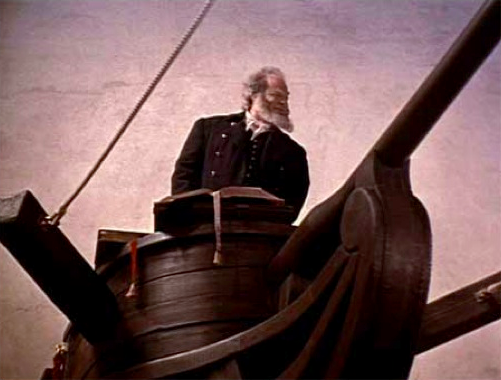 In today’s chapter, Ishmael watches “the famous Father Mapple” ascend the pulpit. This particular pulpit is shaped like the prow of a ship and, instead of stairs, it features “a perpendicular side ladder, like those used in mounting a ship from a boat at sea.” What does it mean that, after Mapple climbs up, he “deliberately drag[s] up the ladder step by step, till the whole was deposited within, leaving him impregnable in his little Quebec”? (Melville had seen Quebec’s fortress on his honeymoon in 1847.) How should this gesture affect the way in which we listen to the sermon that Mapple gives in the next chapter?

In the final paragraph of the chapter, Ishmael offers us an allegorical reading of Mapple’s pulpit:

What could be more full of meaning? — for the pulpit is ever this earth’s foremost part; all the rest comes in its rear; the pulpit leads the world. From thence it is the storm of God’s quick wrath is first descried, and the bow must bear the earliest brunt. From thence it is the God of breezes fair or foul is first invoked for favorable winds. Yes, the world’s a ship on its passage out, and not a voyage complete; and the pulpit is its prow.

But is he being serious? Does he really believe that “the pulpit is this earth’s foremost part,” or is he being ironic? And, if he is serious, is suggesting that the world should be led by the pulpit or is he merely diagnosing the state of things?

As we read, we’ll be tempted to understand many things allegorically. The novel seems to invite it. I’d suggest caution.

Today’s chapter is read by Nick Atkinson and illustrated both with a picture of the pulpit in the Seaman’s Bethel and a still (shown above) from John Huston’s film version of the novel, which featured Orson Welles as Father Mapple. (In the later film adaptation of the novel starring Patrick Stewart, Mapple would be played by Gregory Peck, who played Ahab in Huston’s version.) Visit the site to see the illustrations.