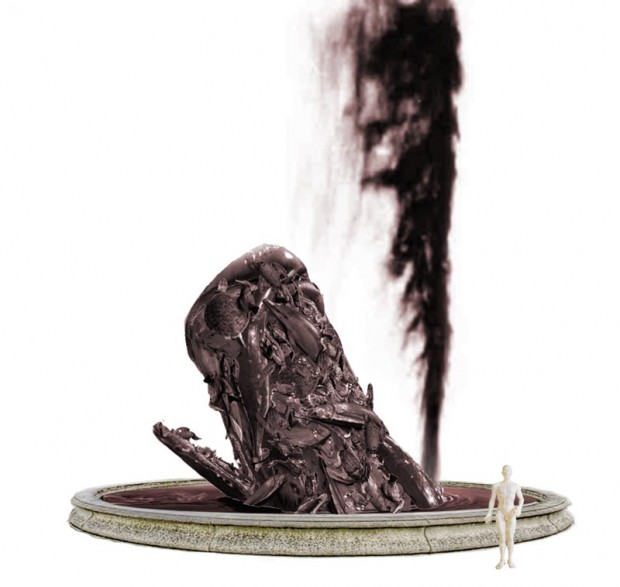 Ishmael and Queequeg put their stuff in a “Wheelbarrow” and head off from the Spouter-Inn, “grinning landlord, as well as the boarders, seemed amazingly tickled at the sudden friendship which had sprung up between me and Queequeg — especially as Peter Coffin’s cock and bull stories about him had previously so much alarmed me concerning the very person whom I now companied with.”

I often ask students who have been assigned to read a number these early chapters at once how big the “embalmed head” is. They usually put “cannibal” and “head” together and answer that it’s small because it’s a shrunken head. But someone usually has noted that, in fact, it’s a regular-sized head, because Ishmael has sold it, at the beginning of this chapter, to a barber for use as “a block — presumably for wigs.

Queequeg and Ishmael take a little “packet schooner” to Nantucket, where they will begin their whaling voyage The chapter is all about cross-cultural misunderstandings and opportunities to engage in mutually beneficial exchanges. It includes two delightful anecdotes about cross-cultural misunderstanding, one in which Queequeg comes out looking foolish and uncivilized, the other in which a supposedly civilized ship’s captain comes out looking like a savage.

The brief chapter’s treatment of this idea becomes more serious, when Queequeg gets tired of being mimicked by various bumpkins on the schooner, who are amazed that two people as different Ishmael and Queequeg can be friends. Queequeg tosses the bumpkin across the deck of the ship, drawing the ire of the schooner’s captain. Moments, later, the bumpkin is “swept overboard” as the captain gets distracted causing the boom of the mainmast to swing across the decks, and it is none other than Queequeg who jumps into the water to save the life of the “greenhorn.”

“Wheelbarrow” portrays Queequeg as heroic figure, perhaps even a tragic figure, as it foreshadows his eventual demise. Ishmael, for his part, decides then and there to stick close to Queequeg from then on, knowing that the big cannibal is likely to be the best protector he can find. The chapter ends with a wonderful line:

He did not seem to think that he at all deserved a medal from the Humane and Magnanimous Societies. He only asked for water — fresh water — something to wipe the brine off; that done, he put on dry clothes, lighted his pipe, and leaning against the bulwarks, and mildly eyeing those around him, seemed to be saying to himself — “It’s a mutual, joint-stock world, in all meridians. We cannibals must help these Christians.”‘

“Wheelbarrow” is read (marvelously) by the offbeat singer-songwriter Mama Tokus. The equally marvelous illustration is Proposal for Memorial (2011) by New York-based artist Alexis Rockman. Visit the “Big Read” site to see it in higher resolution.