The chapter “Biographical” is Ishmael’s reconstruction and recounting of the personal narrative that Queequeg unfolds while they are lounging about in the Spouter-Inn. Though written in a comic vein, it nonetheless points to some of the novel’s serious concerns, such as the deficiencies of Christianity (both in theory and in practice), the opportunities for cosmopolitan interaction made available by whaling, adn the limits of Western Enlightenment rationalism and confidence in science progress. It also demonstrates the further development of the strong between Ishmael and Queequeg, despite their differences. Ishmael is a Christian and not well-to-do; Queequeg is a “pagan” and the son of a king. Both of them, however, are curious about the world and take to sea in order to see more of it. Both of them are disappointed by Christianity as it is commonly practiced.

Ishmael touches on the limits of Western reason and science when he says this about Queequeg’s home island of “Kokovoko”: “It is not down in any map; true places never are. The limits of map-making, and the kind of knowledge that maps represented, are explored further in the enigmatic later chapter called “The Chart.”

This sentence also forms the basis for the project that serves as the illustration for the chapter, Meridians’ GPS drawing 2005, London, by Jeremy Wood. The illustration is a reproduction of a large (8.5 x 1.5 metres) satellite picture printed on cotton on which the words have been superimposed in white. Wood describes the project on his website:

I arrived on a train. From Shortlands station in Bromley I first headed for a newsagent to top-up on sugar and water before embarking over a golf course on a walk along the words of Herman Melville. The quote “It is not down in any map; true places never are.” first appeared in 1851 in Melville’s Moby Dick. I set out to map these words as part of a voyage along two meridians, two arbitrary lines that slice through London. I carried a handheld GPS (Global Positioning System) receiver to trace my movements by recording my position regularly along the journey. 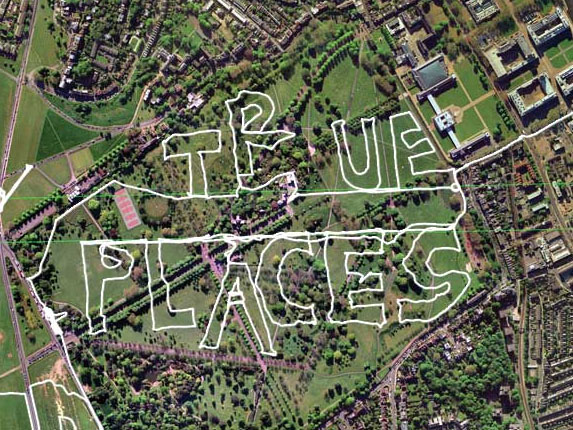 You can read the entire account here. Wood’s understanding of “true places” is playfully Melvillean (the phrase is superimposed on “Greenwich Park, home of the Royal Observatory: the place where time and space was established as an international standard in 1884). The project was commissioned by the University of Minnesota Design Institute for its award-winning book Else/Where — Mapping; New Cartographies of Networks and Territories (2006), published by the Design Institute and distributed by University of Minnesota Press. The work has been shown in Lisbon, Sydney, Barcelona, and The Hague.

Today’s chapter is read by the New Zealand novelist Witi Ihimaera, a Maori writer who is perhaps best known as the author of Whale Rider, which was made into an acclaimed film that garnered its young star, Keisha Castle-Hughes, an Academy Award nomination.