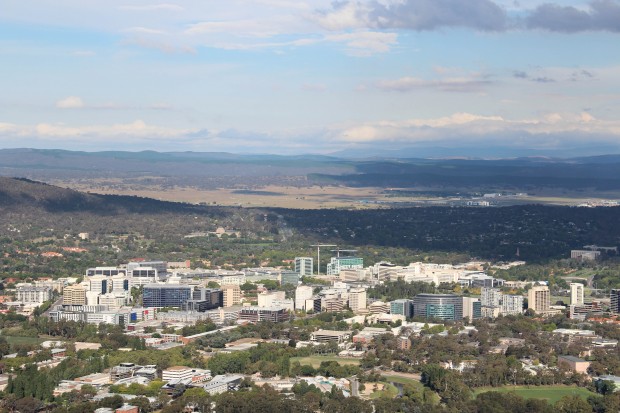 When I first heard about the conference on cosmopolitanism being held by the Island Southeast Asia Centre (ISEAC) at Australia National University in Canberra. I jumped at the chance to add Australia to my list of continents visited. Only Antarctica remains, though I won’t really count Africa until I’ve been sub-Saharan. (Something that may happen this summer.)

Canberra is a planned city, situated between Sydney and Melbourne, though closer to the former. The spot was chosen in 1908 as a compromise, because neither Sydney nor Melbourne would agree to let the other become the nation’s capital. Canberra was designed by the Chicago architects Walter Burley Griffin and Marion Mahony Griffin, and next year marks the 100th anniversary of the beginning of construction.

As capital cities go, Canberra is pretty sleepy. The picture above was taken from the Telestra Tower at the top of Black Mountain, just west of the city center, and it shows the downtown. My hotel, the Crowne Plaza, is next to the cranes just to the right of the center of the picture, and the Canberra Centre, a mall that occupies several blocks, its buildings joined by enclosed walkways on the “first” floor, is just to the left a little forward. ANU is in the foreground at right. It’s very, very green all around the city, which seems dominated by its landscape.

To put things in perspective: the shops in the Canberra Centre close at 5:30 p.m. on weekedays, 5:00 p.m. on Saturdays, and 4:00 p.m. on Sundays. It’s open late on Fridays (9:00 p.m.). A few restaurants — like Sammy’s Kitchen, where I had lunch yesterday with some of the conference organizers, or Kingsley’s Steak & Crab House, where I had a wonderful T-Bone for dinner, are part of the centre and spill onto the street, and they remain open after the rest of the centre has closed. But the whole area has a deserted feel to it at night. On Saturdays, the parking meters near my hotel only charge you from 9:00 a.m. to noon., which tells you something.

i decided to rent a car because I was arriving late last Wednesday night, and while driving on the left is something I get used to quickly, I decided to take it easy on myself an opt for an automatic transmission rather than a manual. Left-handed shifting at night on unfamiliar roads seemed like it might have been a bridge too far.

But nothing in Canberra seems like it’s too far. The airport is about a 15-20 minute drive, and Google Maps keeps telling me that wherever I want to go is about 8-10 minutes away by car.

Looking for whatever culture might be available, I bought tickets before arriving to see an Arab Australian comic named Akmal (Saleh), who was trying out material for a new show at the Canberra Theatre Centre, about a five-minute walk from the hotel. That was Friday night. On Saturday, I’d planned to attend the Canberra Symphony Orchestra‘s outdoor “Proms” concert, but I received an e-mail at mid-morning saying that the concert was cancelled due to a forecast for severe weather. For a while, as I visited the National Museum of Australia in the late afternoon and then walked around the artificial Lake Burley Griffin in the bright sunlight, it seemed that the weather gods might have been playing sport with the symphony. But from the top of the Telestra Tower, which I visited next, you could see clouds rolling in from the distance, and, sure enough, there was driving rain, crackling thunder, and lightning bolts at about 7:00 p.m. The post-storm air, tinged by the smell of wet eucalyptus, was delicious and very un-Abu Dhabi.

This morning I’m going to venture south of the city centre toward the Parliament Building and the National Gallery of Australia, which has a special exhibition called “Renaissance: Raphael, Botticelli, Titian, Bellini.” The exhibition features 15th- and 16th-century paintings from the Academia Carrara in Bergamo and runs until April 9.

After that: further down south, to the Tidbinbilla National Park, in search of a brief bush walk and a marsupial or two.

As far Antarctica goes, who knows? According to this recent article from the National, the company Antarctic Dream will be running cruises in November …