I’ve never been very good at keeping journals. I’d always start well, but then I wouldn’t keep it up, and I would leave blank pages to fill in later, and sometimes I would, and sometimes I wouldn’t and … let’s just say that I’ve noted some pages in the third journal from the 1984 trip that have dates and places at the top, but nothing else below. But, thirty-five years later, even those bits of information — date and place — are useful as one tries to reconstruct the past. 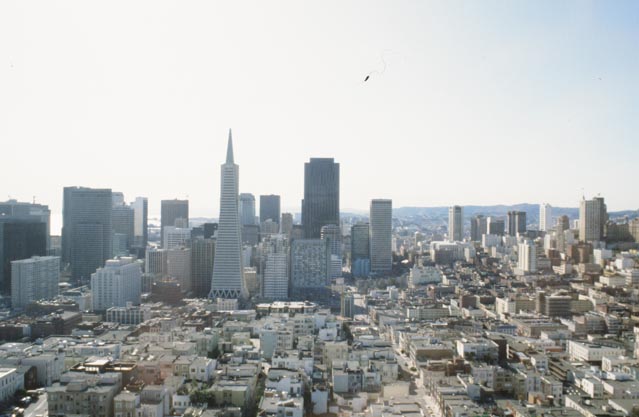 San Francisco,
back in the day.

Knowing, I think, that I’d never be able to keep up a full journal, I decided to kill two birds with one stone: I would write letters and keep carbon copies of them in the journal. And that’s what the first entry in the journal is: dated “February 21, 1984,” it’s a letter to S. describing my first couple of days in San Francisco. Reading it now brings me back to the days before e-mail, Skype, and cell phones made keeping up a long-distance relationship so much easier. These were the days of letters and stamps and really expensive long-distance calls.

The letter is something of a hybrid, an odd mixture of love letter and travelogue. My recollection, now, is that S. ultimately came to feel that my letters to her were too much of the latter and too little of the former. So the moving scene with which it begins — the tearful good-bye at the airport — and with it with the hope that we will rekindle our relationship in Paris three months later, quickly gives way to an account of the plane ride, a conversation with two guys who were college buddies at Williams, the meal on the plane, and a movie called Brainstorm that I apparently watched.

I don’t really recall any of that — in fact, I must confess that I don’t actually recall the tearful goodbye — but I do remember visiting San Francisco for the first time in the company of my uncle, my mother’s half-brother. (I’d only recently discovered that he was actually my uncle and not an “uncle” in the sense that Filipinos often use the term, as a respectful way of addressing an older male relative — but that is another story.) 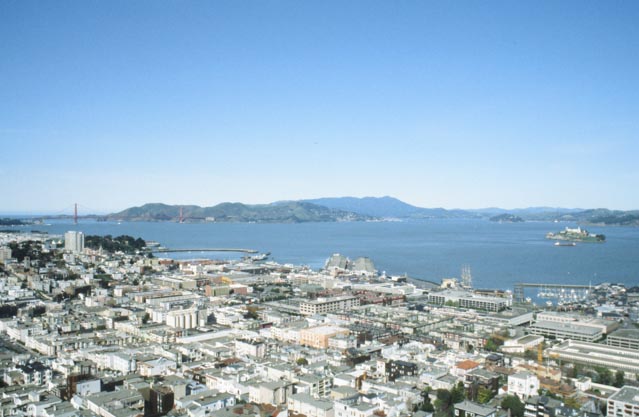 In the intervening years, I spent a lot of time in the San Francisco Bay Area. My college roommates C. and J. moved there, my wife’s dear college friend lives there, and I did a post-doc at Berkeley for two years after graduate school. It’s fun, though, to look back at the wonder with which I first saw the city. I wrote (in full travelogue mode):

San Francisco is such a wonderful city to walk around in; I’ve never seen such a naturally scenic city. Surrounded by the the bay, which is truly beautiful, and the hills in the distance, all green (the entire city is wonderfully green now — it took me a while to realize what it was that was so different from NY), one seems constantly to be stumbling onto one beautiful view after another. The hills of the city only add to the effect, as one turns a corner only to see a steep street—unlike any in New York—angling up into the distance, lined by those short buildings. Downtown, of course, could be any American city with its tall buildings and spare sunlight. 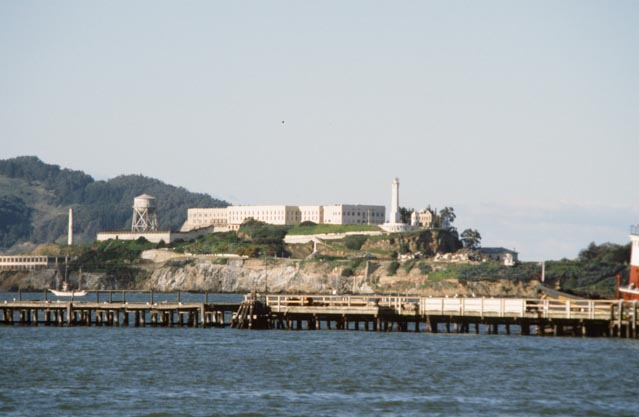 Apparently, though, I didn’t actually get to ride the cable cars during that trip: the system was being rehabilitated. That probably accounts for my spending an entire day riding every line the next time I visited the city.

I closed the letter with the hope that someday S. and I would “take a trip out West together. … We could visit here, then drive down the coast to L.A.” S. and I would indeed take that trip a few years later.