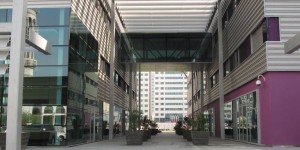 I often ask my students to look for what I call exemplary moments in the texts that they are reading, by which I mean a moment — it can be a word, a phrase, sentence, a passage, a stanza, a scene — that captures something crucial, whether it be formal or thematic, about the larger text from which it is drawn. But you can find such exempla not simply in texts but all around you.

Here is an exemplum that captures, for me, many of the paradoxes, difficulties, and opportunities that NYU Abu Dhabi presents.

It’s the physical address of NYUAD:

The building is so new that it doesn’t have a proper address yet (or maybe the address above is simply going to be the proper address). In any case, the city’s addressing system is in flux. Here’s an explanation of Abu Dhabi’s street addresses from wikitravel.org

Street addresses in Abu Dhabi are simultaneously very logical and hopelessly confusing. Many roads have traditional names, like “Airport Rd”, which may not correspond to the official names, like “Maktoum St”, and the city is divided into traditional districts like “Khalidiyya”. However, by recent decree, the city has been split up into numbered “zones” and “sectors”, with all roads in each sector numbered, First St, Second St, etc, and the vast majority of street signs only refer to these. The system of main streets is straight forward enough once you realize that the odd numbered streets run across the island and the even numbers run along it. So First St is in fact the Corniche, and the odd numbers continue out of town to 31st St which is near the new Khalifa Park. Airport Rd is Second St and the even numbers continue to the east through to 10th St by Abu Dhabi Mall. On the west side of Airport Rd, the numbers go from 22nd Street to 32nd St by the new Bateem Marina. Alas, confusion is caused by the local streets, which are on green signs (main streets are on blue signs) and are also called First, Second etc. Most locals opt to ignore the system entirely, and the best way to give instructions is thus navigating by landmarks, if taking a taxi, odds are you will get to “behind the Hilton Baynunah” much faster than “Fifth Street, Sector 2”. 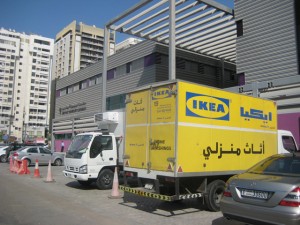