We’ll start tomorrow with Joel Barlow’s sunny, pastoral, mock-epic “The Hasty Pudding,” before turning to his dark final poem, “Advice to a Raven in Russia,” which describes the horrific scene that is left after one of Napoleon’s battles in Russia. From there, the graveyard school of poetry: Thomas Gray’s “Elegy Written in a Country Church-Yard” and its American counterpart, Philip Freneau’s “The Indian Burying Ground.”

Then on to Bryant’s “Thanatopsis” (the title of which means “meditation on death”), which I will present as an Americanization of Wordsworth’s poetics, followed by a consideration of Poe’s “Raven” as the example of a Coleridgean approach to poetry. A few words about Poe’s style, which I will defend against Harold Bloom’s scathing criticisms, and then a brief consideration of “William Wilson” to set up the idea of the Doppelganger, which might help the students read Charles Brockden Brown’s Edgar Huntly over the weekend.

And then — if I’ve timed everything correctly — a bit of fun stuff via video.  Here’s a hint: 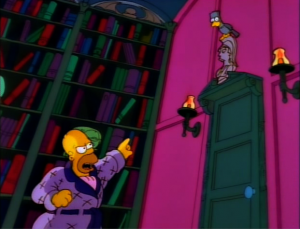