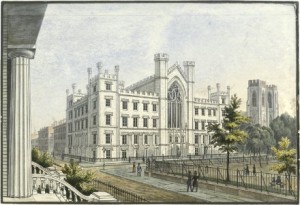 Today, toward the end of a section meeting that I was visiting for the Writing New York course, I had a thought: What would Henry James’s Washington Square look like as seen through the lens of trauma studies? Dr. Sloper might emerge as a victim of both personal and cultural trauma. The personal trauma is the death of his wife in childbirth, which leaves him a cold, detached man who erects barriers of irony to protect himself from the world around him and produces, in his daughter Catherine, another traumatized subject. The cultural trauma might be the waves of immigration into the lower parts of Manhattan that push men like Dr. Sloper further and further uptown. Not to mention the history of the Square itself, with its hanging tree and its paupers’ graves.

I think I’ll suggest this to Bryan Waterman as a way of approaching James’s novel when we write about it for the cultural history of New York City on which we are collaborating.

[The picture above shows NYU’s neo-gothic Main Building on the west side of the square ca. 1850. It was demolished in 1894. For a Washington Square timeline, see this post over at PWHNY.]