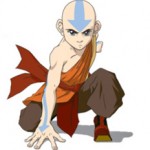 So I’m watching the Super Bowl, and there’s a commercial for M. Night Shyamalan‘s new movie, The Last Airbender, which is due out on July 2.

The thought of Shyamalan directing the film adaptation of what in my household is a beloved television series — “Avatar: The Last Airbender” — fills me with some trepidation. I liked The Sixth Sense fine, even though I did figure it out the moment I saw Bruce Willis’s character sitting on the park bench reading a file — and blurted it out, thereby spoiling the movie for my wife. I thought Unbreakable was rather silly, and I haven’t had the inclination to watch any of the films that followed it.

We take our Aang seriously around here: we have all the DVDs, some of us watch them repeatedly, two of us love to engage in “waterbending” in the swimming pool, and one of us has actually been Aang for Halloween: 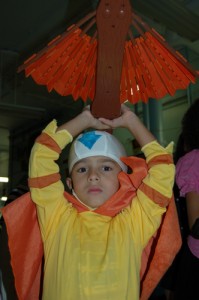 So we will be pissed if the movie isn’t any good.

On the other hand, the Super Bowl commercial bodes well, I think.

I’ll show it to the boys tomorrow and report back.