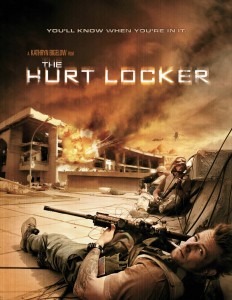 One of the programs that we’ve been conducting in the residence hall where I live is what we call our “Oscarfest”: we’ve been taking students to see all of the films that have been nominated for Best Picture (and making DVDs available for those that are no longer showing). We used to add in films with notable performances that weren’t nominated for Best Picture, but with that category expanded to ten this year, the only extra film we’re including is Crazy Heart.

At each of the post-film discussions at which I’ve been present, when the talk turns to a discussion of which film should be named Best Picture, the two films that inevitably become the subject of discussion are James Cameron’s Avatar and (his ex-wife) Kathryn Bigelow’s The Hurt Locker. I’ve seen the former twice (in IMAX); the latter is on the docket for a home viewing this weekend. Almost all of the students think that The Hurt Locker should win. They find it “powerful,” “groundbreaking,” and “realistic”; they think it “speaks” to their generation. They think it’s different from other war movies, which they see as action films that romanticize war.

The Hurt Locker may be that good. I’ll write about it once I’ve seen it. But the students’ comments make me wonder what war films they’ve actually seen. At least since Apocalypse Now (1979) almost thirty years ago, American war films have tended to be brooding meditations on the futility of war. Even films that overlay a more archetypal storyline — for example, Oliver Stone’s Platoon — or make use of a more conventional narrative structure — for example, Steven Spielberg’s Saving Private Ryan — have made it a point to dramatize the ugly violence of war in visceral terms that assault the audience. So I’m wondering if I will find The Hurt Locker any more “gripping” or “realistic” than, say, Ridley Scott’s Black Hawk Down (2001).

Is the The Hurt Locker a breakthrough film in the war film genre? Or is it simply a well-made film that forces today’s college-age kids to come to terms with a war that they’ve taken for granted and about which they have worried less than the Vietnam generation did about its war?