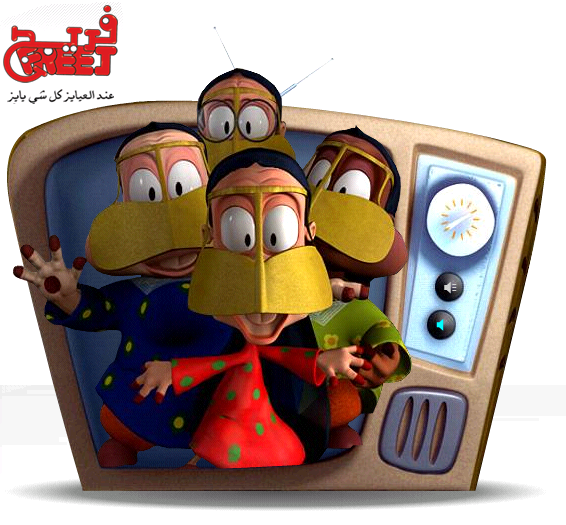 I picked up the first two seasons of the television show Freej at one of the duty-free shops in the Abu Dhabi airport. Freej is a 3D animated cartoon produced in Dubai, which has been a big hit in the Emirates since it debuted in 2006. The series depicts the lives of four friends — Um Saeed, Um Allawi, Um Salood, and Um Khammas — older women living in one of the more traditional neighborhoods in Dubai (freej means “neighborhood” in Emirati Arabic). They gather each day in Um Saeed’s house to drink coffee and chat about their lives, and periodically they go off on little adventures. Each of the characters has distinctive traits (as well as color coding) and wears a niqab (veil). Um Saeed is short and highly educated and generally intiates the conversation; Um Allawi is tall and constantly trading stocks via laptop and cell phone; Um Saloom is forgetful and narcoleptic; and Um Khammas, a North African, is an acid-tongued singer and caterer who specializes in weddings.

The show and its creator Mohammed Saeed Harib (pictured below), were profiled in September in the New York Times.  The 31-year-old attended Northeastern University, where he and his peers watched episodes of South Park. Freej has something of South Park’s irreverence, though it embodies Emirati values and foibles rather than North American. The ladies’ talk isn’t obscene, but it is colorful (at least as far as I can tell from the subtitles). A third season was shown, but the series is now on hiatus due largely to the global financial downturn.

I hadn’t expected my children to take to the show. My nine-year-old can read the subtitles, but my five-year-old can’t. I secretly hope that they would though, because it would be a way of exposing them to the culture of the Emirates and the Islamic world.

As an experiment, I put on the first episode, entitled “Ramadan,” and began reading the subtitles aloud. The 15-minute show features the ladies sitting in Um Saeed’s house moaning about how hungry they are, anticipating the feast that will come with nightfall, and clicking through television channels in search of something to watch. All they find, however, are shows promoting Islamic values, game shows, and sitcoms with titles like “Pain” or “Suffering.” Finally, they break their fast and, stuffed, figure that there must finally be something enjoyable to watch on t.v. But all they find is that new show Freej. “Overhyped,” Um Saeed complains, “just four old hags sitting around complaining. And that Um Khammas really brings the show down!” So Um Allawi faces the viewer, points the remote, clicks it, and the episode ends.

My kids were captivated and we’ve been watching it together for the past few days, daddy voicing the subtitles. We’re almost done with season one. My younger son can’t wait to start season two, because he’s already figured out that it features Um Saeed’s grandson and his hijinks.

My older son and I were out for a walk last Sunday, and I was telling him a little bit about my trip to Abu Dhabi. It’d be really fun place to spend a year, I told him, because it’s summer there all the time, and we could travel to really interesting places like Egypt and India. And you could even learn a little Arabic.

He looked at me and said: “And then I could understand Freej without the subtitles!”

[Image of Mohammed Saeed Harib from the New York Times.]