Although I’ve been blogging regularly over at Patell and Waterman’s History of New York over the past few months, I’ve been on hiatus here. But now that the year has officially begun its second half and my summer graduate class on the American novel after 1940 has come to its end, it’s time to start up this blog again. 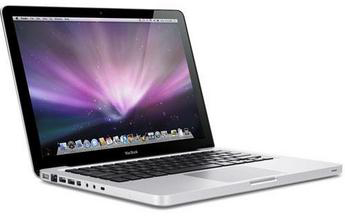 During the hiatus, I’ve done what I predicted in my last post: I’m writing this entry on the 13″  aluminum MacBook that I asked NYU to get for me. I was due a new computer in the fall, but our computing chief managed to provide the Mac early so that I could use the summer to get used to the new platform. I used some of my research funds to upgrade the specs to a larger hard drive and faster processor. Here the important numbers:

It’s basically equivalent to the new 13″ MacBook Pro that Apple announced last month. The new model adds the possibility of a faster processor, and it adds a Firewire port and an SD slot to the side, while subtracting the dedicated line-in jack. A bigger difference is that the new model has no removable battery, though Apple claims that its built-in battery last significantly longer on a single charger. I’m a fan of removable batteries, though, and I’ll be buying a backup battery for my trip to London later in the month.

I’ll admit that one of the first things I did to the machine when it arrived in May was to create a Boot Camp partition and install a copy of the Windows 7 Release Candidate software that Microsoft has made available.  The tech guys told me that they thought that was a waste of hard disk space and that I’d be better off installing virtualization software to run Windows from my MacDesk top. As it turns, out they may have been right: I’ve had little reason to boot up the Windows partition, especially now that I’ve installed Mac versions of Adobe Acrobat Professional and Photoshop Elements. The Windows partition does sport the full Adobe CS3 Master Collection, but I’m thinking that I should learn the Mac video tools that my older son has begun to learn at his school.

For now, it’s video that keeps me linked to the Windows world, because I haven’t yet figured out how to do all the things on the Mac that I know how to do with in Windows to create video clips for my classes. That’s a project for August. I have, however, demoted my Vista desktop to second-tier status, hooking it up to my secondary monitor and moving the Hackintosh that I built around an EFI-X dongle to the primary. In other words, I’m mostly Mac these days.

The NYU tech support folks did warn me that I’d need Windows to run some of the administrative software that NYU uses: in my case, its the accounting software that lets me monitor various research funds that I have. So I’ve installed Parallels software in order to run Windows XP in a virtual window. It works like a charm. Meanwhile, the NYU accounting software doesn’t work well with Windows 7 thus far, so it’s looking increasingly likely that I’ll be deleting that Boot Camp partition from my MacBook in the near future.

Have I become an Apple fanboy? No, I’m afraid I like tinkering with my computers too much to be fond of Apple’s don’t-open-it-up ideology. (For example, I’ve discovered that the Intel Quad Core processor that I used for the Hackintosh, a Q8200, doesn’t support virtualization and therefore can’t run parallels. So chances are good I’ll be upgrading it before long.)

But I’ve found a lot of things to like about the Macintosh, which I’ll be discussing in the coming days.

Computer bilingualism is here to stay.