It’s been unseasonably cool so far this spring in Abu Dhabi, but yesterday it was hot: 99F. And this morning my iPhone tells me that the weather is about to turn … seasonable. 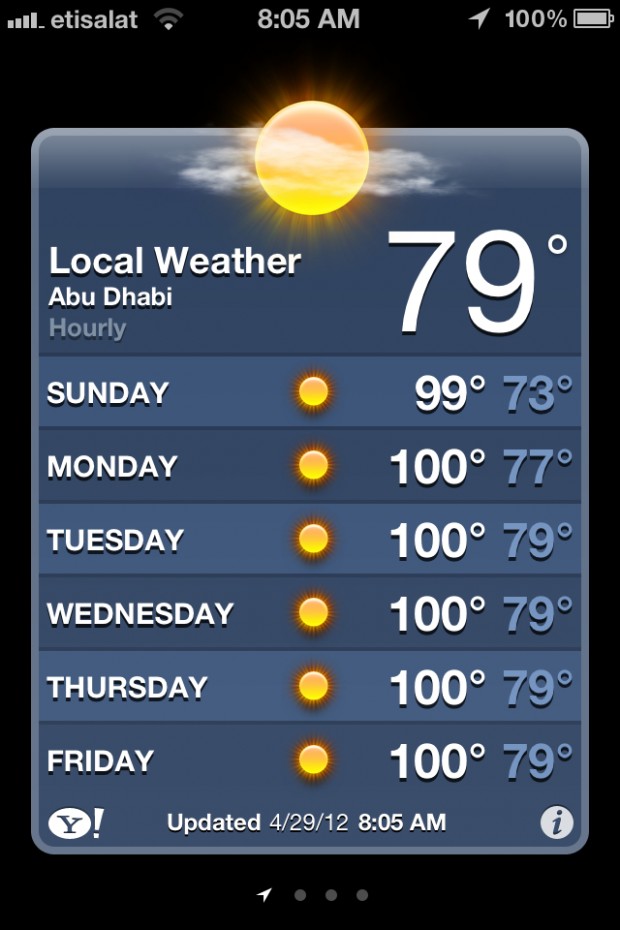 For those of you who think in Celsius (something I haven’t yet learn to do after eight-and-a-half months as an expat), that means its 26C at 8:00 a.m., going up to 38.

My apartment is about to be divided into two different temperature zones. My wife loathes air conditioning and wants to keep the windows open — to enjoy the desert breezes — but I can’t work at my desk when I’m sweating.

Meanwhile, over my coffee and camel link, I find the following tidbits in today’s National.

“Egypt is open for business. I think it’s a fantastic opportunity for tourists to enjoy Luxor, Aswan, and the Pyramids when it is relatively empty, to enjoy the beaches on the Red Sea or the Mediterranean when they are not extremely crowded.” — Mounir Fakhry Abdel Nour (Egypt’s minster of tourism since last February) [Read article]

“A US website is offering an entire floor of the Burj Khalifa at auction – despite developer Emaar denying any knowledge of it. … ‘As far as notable real estate auctions, this one tops them all,” Bill Lange, the president and chief executive of LFC Group, said in a statement. “The auction will attract serious buyers who understand that this is an once-in-a-lifetime opportunity to purchase an entire corporate floor in the Burj Khalifa at a price they determine through online bidding.'” [Read article]

Featured Comment: “The truth on mixed marriages: only the strong will survive”

“The divorce rate in the UAE is on the rise and, as much as we would like to blame the Turkish soap operas as some newspapers have suggested, the truth is a lot more complex. Many factors are contributing to the destruction of that sacred bond that in most cultures is meant to last a lifetime. … The majority of mixed marriages are between Emirati men and expatriate women. But since there are many eligible, attractive Emirati women, why do many Emirati men choose to marry women who come from different cultures? … In many cases, the in-laws are mercifully thousands of kilometres away, only a factor during holidays, over the phone or via Skype, which can dramatically improve the husband’s general quality of life. A marriage with distant in-laws, fewer financial obligations and a wedding that can be conducted in the courts in less than an hour is simply irresistible to many Emirati men.

“To ensure that Emirati men make the right decision and are aware of the challenges that accompany cross-cultural marriages, a course could be offered before they make such a life-changing decision, intended to educate both people about the reality and the obstacles that lay ahead of them.

“Not only could a course be offered before the wedding, but also during the term of the marriage and when problems begin to arise. A culture of marital support needs to be freely offered and better promoted to ensure that couples are educated and have a place to turn when all else fails.” — Taryam Al Subaihi [Read article]

The best piece of news in the paper, from my perspective, is about the team from NYUAD that took first place in the energy competition at the Hult Global Case Challenge. Four NYUAD  sophomores — Madhav Vaidyanathan (India), Songyishu Yang (China), Muhammad Awais Islam (Pakistan), and Gary Chien (Taiwan) — and NYU alumnus Neil Parmar (Canada),who actually writes for the National, received the award for a plan to help SolarAid provide solar lighting to one million homes in Africa by 2013. The Challenge also had competitions for initiatives in education and housing. Bill Clinton announced the winners in New York.

I’m especially pleased about the team’s success because the NYUAD student who initiated the effort — Madhav Vaidyanathan — was one of the candidates whom I interviewed during the first admissions weekends that I attended in November 2009. Don’t tell him, but when people used to ask me why I was so excited about NYUAD during the months before we opened, I used to cite the polymathic Madhav and our ability to get him excited about NYUAD as sign of the promise of the institution.