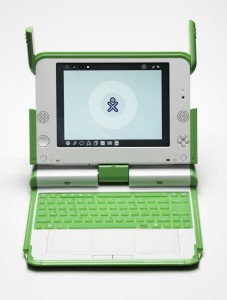 Almost three years ago, I signed up for the One Laptop per Child (OLPC) Give One, Get One program. For $400, I donated one of the program’s laptops to a child in the developing world and received one myself. I was interested in Nicholas Negroponte’s idea of putting together a sub-$100 laptop that could be given to every child in a developing country, and I wanted to have a chance to check out the hardware for myself. Here is the mission statement of the OLPC program, taken from its website:

To create educational opportunities for the world’s poorest children by providing each child with a rugged, low-cost, low-power, connected laptop with content and software designed for collaborative, joyful, self-empowered learning. When children have access to this type of tool they get engaged in their own education. They learn, share, create, and collaborate. They become connected to each other, to the world and to a brighter future.

As the website puts it, OLPC is “not a laptop project. It’s an education project.”

It’s a nice little piece of hardware: sturdy, convertible to tablet form, with built-in wifi and a color screen that you can easily read in sunlight. The keyboard is water repellent, though a bit too small for adult hands. Its operating system, called “Sugar,” is based on Linux, and it comes with a number of activities built into it. I thought my younger son would enjoy it, but by the time it arrived he’d already begun playing with Mommy’s computer — drafted into the Microsoft army at the age of two, alas — and now he’s enamored of my iPad.

So the OLPC has been gathering dust. I decided to sell it on eBay, noting that original models are still fetching $150-180. And then I learned about “OLPC for Haiti,” a program in which used OLPCs are being sent to Haiti and given to children displaced by the earthquake. So my barely used OLPC laptop is heading south to Haiti, where I hope it will make a difference to someone in need.

If you have an OLPC that you’d like to donate, you can learn more about the OLPC for Haiti program here.

And below you can watch a video of the TED Talk that Negroponte gave in 2006, describing the OLPC program.

And a follow-up talk from 2007, describing the program in its second year.