I have a new knee brace. The old one (shown below at left) was put on in the operating room. It had stiff pieces of metal running along the sides and bottom, and it wasn’t very comfortable. 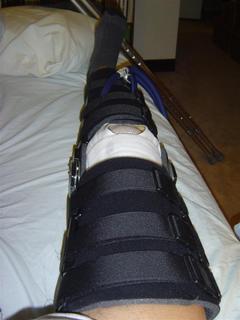 The new one is much more comfortable — and much bigger. Manufactured by Donjoy, the brace runs from the top of my thigh to my ankle, with foam padding around the thigh and calf secured by Velcro straps and adjustable hinges which are currently set to 0 degrees: no flex at all. We decided to keep using the EBIce cold therapy unit. Some quick research suggests that the EBIce has been around for about 12 years, and I think it’s made a big difference for me. The knee, when it came out of its bandages, looked far less swollen than I remember it looking in similar circumstances in 1987.

Yesterday was my first post-op appointment with my orthopedic surgeon, Dr. Andrew J. Feldman. He walked into the room holding my charts and said, “You really made me work hard.”

I’d already heard at the hospital that it had last longer than originally predicted, and his operative report was 3 single-spaced pages.

To really find out what’s going on inside a knee, it seems, you have to get in there with a scope and take a look. (In the words of the report: “Arthroscopic portals were made medial and lateral above the joint line and a tour of the knee was undertaken.” I love it.)

The pre-operative diagnostic tools (visual examination, physical examination, x-rays and a CAT scanogram) presented a general picture that suggested the failure of my previous ACL reconstruction, a varus knee condition, and degenerative arthritis. Or, in the language of Dr. Feldman’s report, the “pre op diagnosis” was: “failed anterior cruciate ligament reconstruction, rule out degenerative arthritis of the knee, rule out meniscus tear, rule out malalignment, rule out painful hardware.”

My operation took a long time not because the surgical team discovered anything unexpected but because they found everything they expected to find and in a worse rather than better condition. So the “post op diagnosis” reads: “failed anterior cruciate ligament graft; grade 4 degenerative arthritis, medial compartment; medial meniscus; malalignment with varus deformity; joint space narrowing; and painful hardware.” In other words, all of the various conditions they might have hoped to “rule out” were, in fact, present. Dr. Feldman showed me pictures, taken with the scope, of the healthy side of my knee — nice, smooth, white articular cartilage — and the unhealthy medial side — yellowing, uneven articular cartilage and lots of bone showing. He described the “kissing lesion” that occurred where the bones were rubbing together. Before the operation, Dr. Feldman had described the arthritis as aggressive. My sense was that he what he saw was as bad as he had feared, if not worse.

Hard work, indeed! And complicated, Dr. Feldman said, by the fact that the lower “painful staple” was located very close to where he needed to make the cut for the osteotomy.

The fact of the grade 4 arthritis means that there’s a chance that this operation won’t produce the results we’re hoping for — that the shifting of the burden of weight-carrying  to the outer, healthy portion of my knee won’t slow the spread of arthritis on the medial side and won’t stave off a total knee replacement for very long. But, at least yesterday, Dr. Feldman believed that there was a very good chance that we would achieve success. Only time — and lots of monitoring and physical therapy — will tell.

Whatever happens, I’m convinced that this operation was the right thing to do.