Sarah Silverman is right: the first half-hour of Indiana Jones and the Temple of Doom (1984) doesn’t suck. After reading the article in Wired magazine that I discuss below, I decided to watch the beginning of the film again. The first half-hour is a frothy, kinetic homage to Busby Berkeley, 1930s comedy, and Republic Pictures serials. It features features Kate Capshaw singing “Anything Goes” in Mandarin in a Berkeley-style production number set at the Club Obi-Wan, followed by a wildly choreographed brawl, a car chase through the streets of 1935 Shanghai, and a sequence in which an escape raft is launched from a crashing plane just in the nick of time, careening down Himalayan slopes and finally hurtling down rapids.

That’s actually the first twenty minutes; the next ten take us to the brink of Pankot Palace, where the story really begins. I had meant to stop watching there, but I just couldn’t.

In the documentary about the making of the film that’s included on the fourth disc of the DVD box set, Steven Spielberg says that The Temple of Doom is his least favorite of the Indy films, in part because it’s so much darker than the other two. George Lucas recalls that he wanted the film to have the same relation to Raiders of the Lost Ark (1981) that The Empire Strikes Back (1980) had to the original Star Wars (1977).

The Temple of Doom has always been my least favorite as well, not because it’s darker, but because I’ve always felt that it doesn’t deepen or extend the themes of Raiders in the way that Empire deepens and extends the themes of Star Wars: A New Hope. It’s in Empire that the Star Wars mythology is enriched through the revelation that the conflict between Darth Vader and Luke Skywalker is, in fact, a conflict between father and son. The Temple of Doom is a prequel and its lack of interest in revealing further details about its hero’s biography suggests that it’s just one of the many adventures that make Indy the man he is in Raiders of the Lost Ark.  Ironically, the Indiana Jones series achieves Empire’s deepening effect in the third film, Indiana Jones and the Last Crusade (1989), not by turning even darker, but rather by returning to the lighter, more comic sensibility that animates the first film.

There’s comedy in The Temple of Doom, too, particularly in the first hour, with the over-the-top 1930s Orientalist dinner scene in which the filmmakers try to invent the most disgustingly non-Western dishes they can imagine. There’s also the bickering and double-entendre between Harrison Ford and Kate Capshaw that is meant to evoke the war-between-the-sexes banter that was such great fun in screwball comedies like It Happened One Night (1934) or His Girl Friday (1940). But thereafter the film turns into something more like a horror-comedy, with images of hearts torn out and children enslaved, in which the aura of brutality is punctuated by slapstick moments. The second hour is more relentless in its kinetic pacing than Raiders and more horrifying too. 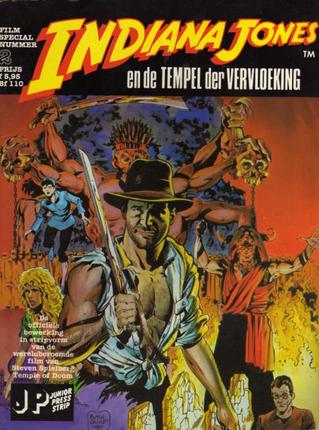 I was in Amsterdam on the day that the second film was released, so I watched Indiana Jones and the Temple of Doom in English with Dutch subtitles. I was in-between college and graduate school, and I was spending the first eight months of 1984 on a world tour that had taken me to Asia for the first time. I remember that day vividly: Van Gogh Musem in the morning; Indiana Jones en de tempel der vervloeking in the afternoon; a meal of rijsttafel for dinner; and the Melkveg to round out the night. Something like a perfect day.

I remember enjoying the film, but preferring Raiders. My favorite set-piece in the new film was the sequence in which Indy and his side-kick Short Round (played by Ke Huy Quan) are in a room about to be impaled by spikes and are yelling at Kate Capshaw to help them by venturing (in her pajamas) down a bug-infested corridor in order to find a lever that will stop the mechanism. I later found out that it was Spielberg’s favorite bit too.

Lego has just begun releasing Indiana Jones sets, and Lucasarts will release LEGO Indiana Jones: The Videogame this summer that is similar in sensibility to its successful LEGO Star Wars games. My seven-year-old son is intrigued by the sets and looks forward to playing the game. When I looked at the case of the DVD, I saw that the film was rated PG. Hmm, I thought, maybe he could watch this. But then, as I watched the fantasy violence unfold, I remembered that Indiana Jones and the Temple of Doom was one of the films that helped bring the PG-13 rating into existence. So I think my seven-year-old will be getting to know Lego Indy this year rather than the Indy that I know and love.

At least until he’s eight. That’s the age at which Shia LeBeouf claims he first saw the first two Indiana Jones films on tape, making him a fan for life. (You can see a video interview with LeBeouf in the Videos section of indianajones.com.) I can’t wait to watch him this May in Indiana Jones and the Kingdom of the Crystal Skull. I wonder when Fandango will have advance tickets.