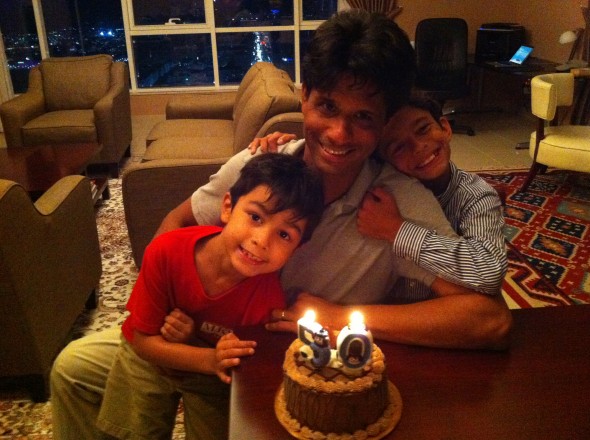 The alarm goes off. I think to myself that back in New York, where it is 10:15 p.m. EDT, it is still October 8, and I am still in my forties. I remember that, when I turned 40, it was not even a month after 9/11. My wife and I had gone away to the Catskills for a weekend, leaving our not-quite-one-year-old son with my sister- and mother-in-law. The U.S. bombed Afghanistan that weekend. I discovered that ten years later my birthday would fall on a Sunday. I imagined that I would be spending the previous night having a large party in some dark downtown bar with loud music and a whole bunch of liquor. The party would just be kicking into gear at 10:15 p.m. EDT (6:15 a.m. GST). And Sunday, my 50th birthday, would be a well-earned day of rest.

Not in my wildest dreams, ten years ago, did I expect to be waking up in Abu Dhabi on the morning of Sunday, October 9, 2011 — which happens to be a work day in Abu Dhabi.

I find myself in a classroom about to lead a discussion of  Chinua Achebe’s novel Things Fall Apart. I am hoping that there is not something uncannily prophetic about starting my 51st year talking about a book with that particular title. Full disclosure: it’s my least favorite text on the syllabus for my Cosmopolitan Imagination course.

After a pretty lively class discussion, I find myself thinking that I might actually have started liking Things Fall Apart (as opposed to, you know, appreciating it intellectually).

I am on an Abu Dhabi city bus heading to the American Community School, which my children are attending. The fare is AED 1 (that’s one “dirham”). I’m taking the bus because, for a New Yorker, there’s something pleasing about taking a new, air-conditioned bus and paying only $0.27 for the ride.

I am at the American Community School, where it is goal-setting day for the second-graders. My son Caleb has been asked to come up with goals in three areas: academic growth, personal growth, and personal interest. He and his teacher will choose one of these goals; he will come up with an action plan; and when he has achieved his goal, he will describe his achievement to his classmates. Caleb wants to: 1) work on his multiplication skills; 2) learn to work better with his brother; 3) learn to do tricks on his skateboard. His teacher suggests that #1 will take place in school anyway and that #2 is something that Caleb will working on with us as a family. The two of them draw up a contract for the pursuit of #3. Caleb describes the trick that he would like to learn. His teacher nods sagely and then refers to it as an “aerial flip.”

This, apparently, is what Caleb has in mind:

He will work to pursue this goal and present it to his classmates in the spring.

I am an in a meeting with other deans and the Vice Provost from New York who directs NYUAD Admissions. We are talking about the past year’s admissions cycle, generally agreeing that it was a great success. My counterpart, the Associate Dean of Arts, is calling in from New York, where it is, yes, 3:20 a.m. on a Sunday morning.

I am at a luncheon with former UK prime minister Gordon Brown, some colleagues from NYUAD, and five thirty-something Emiratis who work for the Mubadala Corporation and are helping us forge links between NYUAD and the Emirati community. My colleagues and I sit mostly on the sidelines of the conversation, as Brown questions these comparative youngsters about the Abu Dhabi’s 2030 plan and Mubadala’s role in it. They, in turn, pick his brains about UK perceptions of the UAE and seek tidbits of advice about the perils of the global economy. He advises investment in Africa. It’s a fascinating exchange for me to watch, and it helps me to think about a course on UAE culture that I’d like to see added to the NYUAD curriculum.

I discovered that I am now down to teach an additional course this spring. It is not, however, the “Classic American Literature” course that I have been planning: 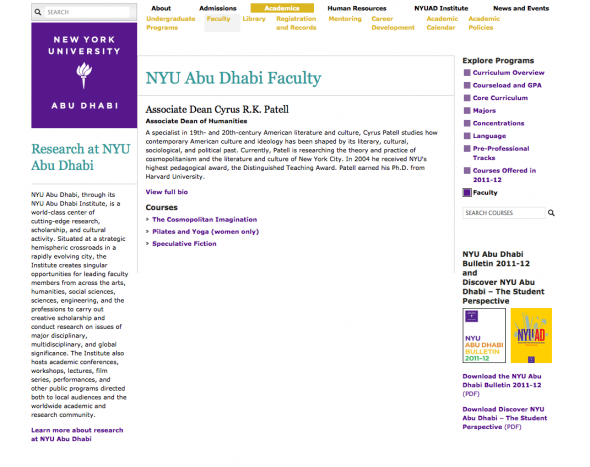 I think, briefly, that someone in NYUAD IT has a wicked sense of humor and is poking fun at me. After that brief flash of narcissism, I think that’s it more likely a sign of a certain unreliability in the course catalog module of our site that colleagues have been reporting.

Our wonderful Arts & Humanities Executive Assistant surprises me with cupcakes and candles and a gathering of staff to celebrate my birthday. Somehow, I manage to avoid having them sing.

I arrive back home at Sama Tower bearing cupcakes for the tykes. A crew has repaired the ceiling in our storage room (the “maid’s room” according to the electrical panel), which was leaking for the second time yesterday. Unfortunately, we’d had a delivery from IKEA and had installed shelves in the room shortly before the second leak sprung. We’ve been here for 8 weeks, and our family infrastructure is still a work-in-progress.

Facetime  on the iPad 2 with my father in New York. He gets a virtual tour of our apartment and chats with the boys. They speak to him in tidbits of Arabic. Ain’t the 21st century grand? Thank you, Steve Jobs.

I am bolting two additional CD shelves IKEA to the wall, across the doorway from 4 shelves holding DVDs. The new shelves now house all of our opera CDs. Sadly, there are still six large boxes of other CDs awaiting disposition. I sense another trip to IKEA before too long.

I have elected to skip Gordon Brown’s lecture at the NYUAD Institute in favor of a birthday dinner out with the family. We go to Moti Mahal Delux about half a mile up Electra Street. My sons — incredibly picky eaters — liked the chicken tikka that I’d ordered from Moti Mahal a few days ago, so it seemed like a good bet for a controversy-free dinner out. And so it turns out to be.

The candles from the office reappear on an ice cream cake from the Baskin-Robbins downstairs. My kids have been eyeing this cake for the past several weeks. They find it meets their expectations. And there are leftovers for tomorrow.

An e-mail from one of my students suggests that they have discovered my secret and are planning something nefarious for our next class.

Not what I imagined ten years ago.

I wouldn’t change any of it. Thanks, everyone, for my wonderful day.