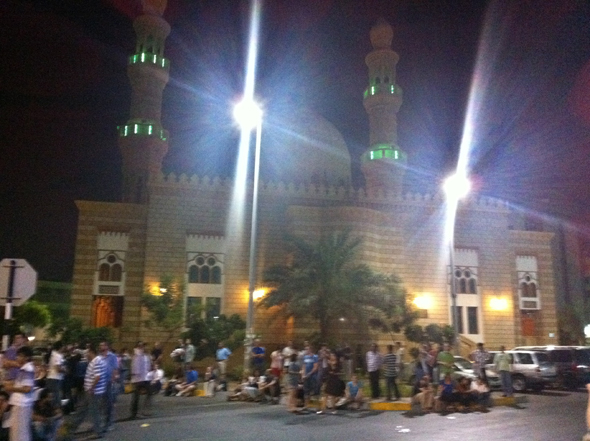 Here in Abu Dhabi (as in many parts of the world aside from the US) we write today’s date this way:

I like the symmetry of that, which won’t be repeated for another hundred years. It makes today special among anniversaries of 9/11.

The next 11-9-11 will be even more special, because it’ll be the 110th anniversary of the date that those two towers — each 110 stories tall — came to earth.

Early this morning, indeed in the very minutes after the day began, I lived through a symmetry that was (to quote the poet William Blake) “fearful.”

Just a few minutes into 11-9-11, my family and I found ourselves descending down a concrete staircase in a very tall building, smelling smoke. I was told later that some of the machinery on the 34th floor of the Sama Tower where we live overheated, causing wires to melt, burn, and smoke. Luckily, it didn’t turn into a major fire. The boys had experienced a couple of fire drills in our old building on 14th Street in New York, but in Abu Dhabi our apartment is on the 37th floor instead of the 15th, and in New York we’d never actually smelled smoke.

It was a visitation of the uncanny that give me, ever so briefly, just the barest glimpse into what it must have been like for those people on that day who walked down almost three times as many flights as we did. The lucky ones, who got down and got out.

Periodically, as we walked down with other members of the NYU Abu Dhabi community, the lights went out, but I had the comfort of knowing that it was simply because the switches were on timers, turned again on with the press of switch — not due to a catastrophic power failure. Walking down those stairs, I felt urgency, but never fear. Outside we discovered that some of the NYUAD students had thought to bring necessities that we hadn’t occurred to us: a guitar, a soccer ball. Thoughtful souls purchased bottles of water and gave them out to those in need.

A fire and smoke at a student housing building for New York University Abu Dhabi has forced the evacuation of hundreds of students and staff in the middle of the night.

Students were transferred from their dorms at the 46-storey Sama Tower to the university’s classroom building just after midnight, while some staff were forced to check into nearby hotels.

They were able to return to the building around 4am.

We were among those who checked into the nearby Cristal Hotel. My 8:30 class was cancelled, along with all the others today, but my older son made it to school in time to take a first-period middle-school exam. Resilient like so many New Yorkers, my kids were mostly calm last night and only a little freaked out at the prospect of going to bed tonight. Mostly they were just tired.

Meanwhile, the National has been running feature articles for the past week about 9/11. The most moving was probably the first in the series, “The Day Our World Ended” (September 3), about a Muslim family from Bangladesh that was devastated when husband and father Mohammed Chowdhury died at the World Trade Center, where he worked as a waiter. Two days later, his son Farqad was born. You can watch a video based on interviews conducted for the article here. 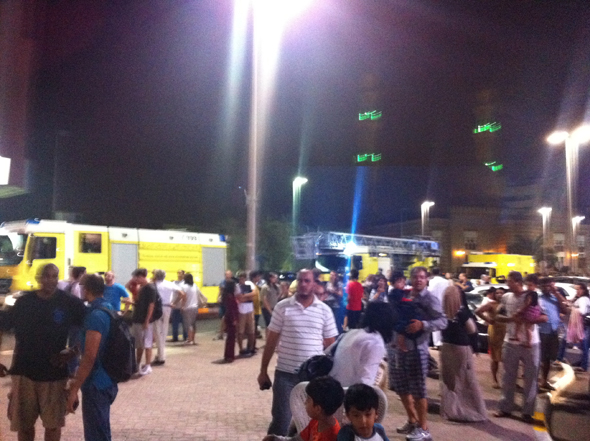 Looking around the parking lot around Sama Tower early this morning and seeing students from all over the world gathered together, I was reminded of a moment from the documentary film 9/11 that my colleague Bryan Waterman and I have been showing on the first day of our Writing New York class since we began teaching it in 2003. It’s part of a montage of scenes from films about New York that begins with a clip from the documentary New York by Ric Burns. The clip describes New York as city devoted to “the exhilarating, often harrowing experiment whether all the peoples of the world could live together in a single place.” The montage concludes with a brief scene from 9/11, after the second plane has hit, when the filmmakers notice how many people of different races and ethnicities are standing in the street, aghast, sharing information and impressions, sharing shock and fear. We use it as an example of New York’s cosmopolitanism — and implicitly as an argument for the necessity of a pursuing a cosmopolitanism that can allow you to embrace rather than reject cultural difference.

In that spirit of cosmopolitanism, I’m pleased to say that one class wasn’t cancelled today at NYU Abu Dhabi: Elementary Arabic I for Faculty and Staff had its first meeting at 7:00 p.m. in Sama Tower as scheduled.

I was proud to be there.