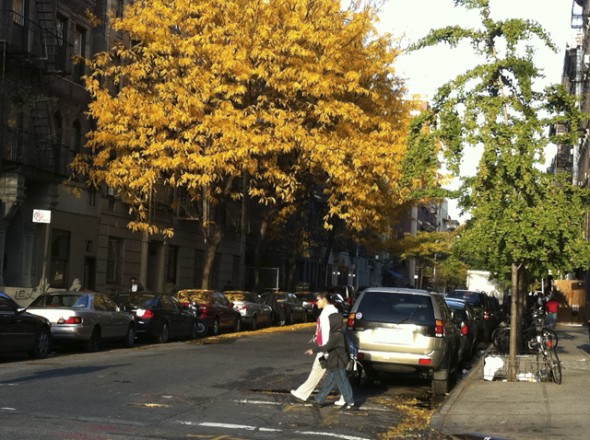 Last Thursday (above), we were treated to a final day of Indian Summer: it was unseasonably warm, mid-70s°F by midday. As I walked from the Lower East Side back to Union Square after taking my son to school in the morning, I found myself thinking about that term, Indian Summer. Can you still say that these days? (“Native American Summer” doesn’t have the same ring to it. But I suppose that’s what Atlanta and Cleveland baseball fans say when it’s suggested that their teams change their names.)

Apparently, the first known use of the term is J. Hector St. John de Crèvecœur’s Letters from an American Farmer (1778): “Then a severe frost succeeds which prepares it to receive the voluminous coat of snow which is soon to follow; though it is often preceded by a short interval of smoke and mildness, called the Indian Summer.”

On Friday, it was a more seasonable mid-50s. Standing around in Stuyvesant Square in filmsy Halloween costumes on Sunday night, it started to feel like late Fall indeed. And this morning it was an unseasonably cold 38°F. I took the walk from the Lower East Side a bit more quickly.

Nothing, though, compare to the chill breeze that’s getting ready to blow across the US of A tomorrow, November 2, Election Day 2010.