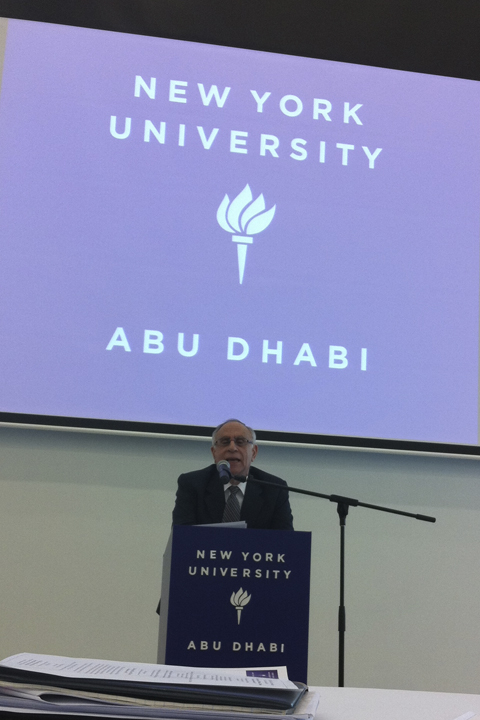 As I flew into Abu Dhabi airport the other night to attend the opening of NYU Abu Dhabi, I thought a line from Tony Kushner’s play Angels in America: “The Great Work Begins.” The line first occurs when an angel arrives at the end of the play’s first part, Millennium Approaches, and also serves as the final line of the second part, Perestroika, where it follows a blessing given by Prior, the play’s central protagonist: “And I bless you: More Life. / The Great Work Begins.” I’ve written about the play’s conclusion over at Patell and Waterman’s History of New York, where I described the ways in which I believe it embodies a commitment to a cosmopolitan approach to living.

I believe that this is great work in which we are all engaged here in Abu Dhabi. “The world only spins forward,” Kushner’s Prior tells us: “We will be citizens. The time has come.”

And now that the time has come to open the Abu Dhabi campus, I’ve been reflecting back on my involvement with NYUAD over the past two years, which I owe both to Senator John McCain and NYU CAS Dean Matthew Santirocco. I wrote about that connection during my first trip to Abu Dhabi last October, and while my account of the genesis of my involvement in the project may have been slightly tongue-in-cheek, I was quite serious when I described having “the fervor of the convert.” That fervor continues, stronger than ever, now that I am serving NYUAD as its Associate Dean of Humanities.

Back in October, we visited the Downtown Campus building before NYUAD had formally taken possession of the site. One building was still closed to us. During my subsequent visits to Abu Dhabi to help out with the admissions process for our first class, I was delighted to see the building become a real workplace and to imagine what the place would be like when it opened in the fall. Watching the candidates spread themselves out in the library or on the lawn while writing personal essays as part of their weekend’s work, I could envision NYUAD as a place of learning and scholarship — as a college.

Now it’s about to happen for real. Yesterday morning, at the orientation program for our inaugural faculty, Vice Chancellor Al Bloom described NYU Abu Dhabi as a “historic undertaking.” Our new provost Fabio Piano described compared NYUAD with the human genome project, on which he worked, and predicted that of the two, it would be NYUAD that would prove to be the more significant. As the day progressed, the excitement of the faculty who had assembled here was palpable, and it was gratifying to start the first of what I hope will be many conversations with my colleagues here about pedagogy, scholarship, and educational innovation.

The Great Work has begun.