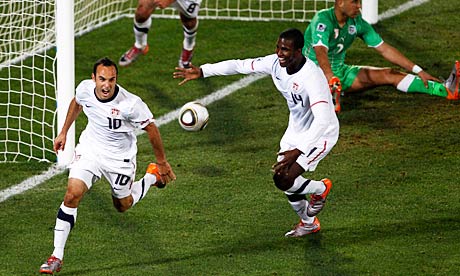 My friend Dick complains that he finds it to sustain interest in soccer games because there is so little scoring, but i think that sometimes it’s precisely the lack of scoring that makes soccer “the beautiful game.” Goals like the one that Landon Donovan scored today in the waning minutes of the USA’s game against Algeria get burned into your memory precisely because they so hard to come by.

I love it when the best players prove themselves to be the best by coming through in the clutch. I’ve called it “The Athletic Sublime.” And Donovan’s goal was sublime.

I count today’s match among the most riveting sporting events I have ever seen, perhaps just behind Game 6 of the 1986 World Series between the Mets and the Red Sox and Game 6 of the 1994 Stanley Cup semi-final between the New York Rangers and the New Jersey Devils. If you know me, you know that I do not make that statement lightly.

My wife called after the game. Despite the fact that none of her “boys” were at home, she found herself watching the game — and riveted to it.

The announcers for ESPN called it a Hollywood ending. But, as I’ve written here before, part of the glory of sport is the fact that such endings aren’t scripted. At the beginning of the 92nd minute, no one knew whether the United States would be flying home tonight or winning its group and moving on to the knock-out stages.