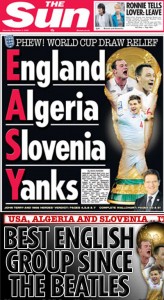 Do you suppose the English tabloid The Sun now regrets this piece, which was entitled “Best English Group since the Beatles” — referring to the World Cup soccer team? After looking at the Three Lions’ opponents in the group stage — Algeria, Slovenia, and the United States — the paper decided that the team was a shoo-in to make it to the knockout stage. The article, published on December 5, 2009, began:

ENGLAND looked dead certs last night to roar into the World Cup knockout stages after landing their easiest ever group.
Their unfancied opponents helped to spell out England’s “EASY” task – Algeria, Slovenia and the Yanks.

David Beckham, at that point still lobbying for a spot on the team before the Achilles tendon injury that dashed his hopes, did offer a cautionary note: “We’ll still have to beat the world’s best to bring the Cup home.”

Uh-huh. At this point, they have to beat Slovenia (ranked 25th in the world by FIFA), having failed to beat the Yanks (ranked 14th) and Algeria (ranked 30th), to even have a shot at the world’s best.

After the game, ESPN’s resident England partisan, former England midfield Steve McManaman, bemoaned his team’s poor play: “Individually when they put on the colors of Manchester United or Chelsea — superstars. Collectively when they put the white of England on — phfft — disappointing.”

Lalas is being a little harsh (or maybe just a little arch), but I think England’s disappointing showing is predictable after Fabio Cappello picked a team full of “experienced” (older) players who’d just been through the trials of the extremely demanding Premier League season. In fact, according to the Guardian, it’s “the oldest squad that England has ever sent to the World Cup, with a record number of caps to boot.”

Supposed superstar Wayne Rooney, who doesn’t have age as an excuse, still looks banged up and not fully recovered from the injuries that marred his otherwise stellar season for Manchester United. No jump in his game. As opposed, say, to Lionel Messi, who’s been working his magic as Argentina has cruised to two victories.

Things may change for Rooney and for England — as long as they defeat Slovenia next week. We shall see.

One thing’s sure: if England does get through to the knockout stage, it won’t have been EASY.