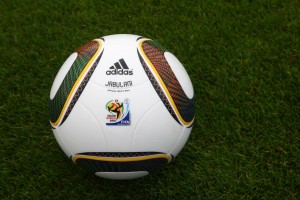 The word jabulani means to “celebrate” or “rejoice” in the the Bantu language isiZulu, which is one of the eleven official languages of the Republic of South Africa, spoken by 25% of its popuation. “Jabulani” is sometimes used as a first name, occasionally shortened to “Jabu.” It is also the name of a suburb of Soweto. And, perhaps most famously these days, it’s the name given to the official match ball manufactured by adidas for the 2010 World Cup.

According to the official adidas press release, the ball is wrapped in numerical symbolism: “Eleven different colours are used in the adidas “JABULANI,” the eleventh adidas World Cup ball. These 11 colours represent the 11 players in every team, the 11 official languages of South Africa and the 11 South African tribes that make the country one of the most ethnologically diverse countries on the African continent.”

The ball features what adidas calls “a completely new, ground-breaking technology”: “eight 3-D spherically formed EVA and TPU panels are moulded together, harmoniously enveloping the inner carcass. The result is an energetic unit combined with perfect roundness.” Hans-Peter Nürnberg, senior development engineer in Adidas’s global innovation team, said before the tournament, “The goalies may find it a bit more difficult to cope because the ball will travel faster, possibly 5% faster, at altitude as the air is thinner and it will also ‘jump’ a bit higher.”

“Jabulani” may mean “rejoice,” but the ball led many people in the soccer world to do anything but. Before the tournament began, goalkeepers complained bitterly about the ball’s unpredictability. One of England’s goalkeepers, David James, said a week before the tournament that “the ball is dreadful. It’s horrible. There are undoubtedly going to be goals scored in this tournament which, in previous tournaments with different balls, wouldn’t have been scored.” Boy, was he prescient, at least as far as freaky goalie gaffes have been concerned.

Is it merely coincidence that the first week of the World Cup has seen a surprising number of errors by goalkeepers, the most prominent being the first — England goalie Robert Green’s mishandling of the ball that enabled the USA to tie their game last Saturday? (One can only imagine what James, fuming after being bypassed to play the game, was thinking when he saw that play.) Green didn’t exactly blame the ball for his mistake, but he did insinuate that it may not have been entirely his fault: “It may well have moved. I don’t often miss a ball like that… not by that much.” (One of the coaches who works with my son looked at the play and immediately blamed Green for not squaring up to the strike, which would have left his body in a position to block the ball after it slipped through his hands.) 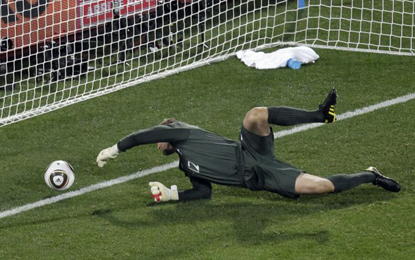 Responding to suggestions that the ball was to blame, adidas responded with a statement blaming the goal on “a massive goalkeeping mistake.” The company continues to believe that the ball is the roundest, lightest, truest soccer ball ever made.

But maybe it isn’t the ball at all. Maybe it’s the higher altitude of many of the stadiums in South Africa. As Chris Jones of ESPNsoccernet points out, “In tests and in trials, in Germany’s Bundesliga as well as professional leagues in France, Argentina, Portugal and the United States, the Jabulani received few complaints.” (The Germans’ use of their ball in league play earlier the year has also been a subject of controversy, with England coach Fabio Capello complaining that it has given the team an unfair advantage. England’s contract with Umbtro has restricted its ability to use other equipment in league play.)

Sven-Goran Eriksson, the former English coach and current coach of the Ivory Coast team, has called for “a summit” about the ball: “Players, coaches and perhaps top goalkeepers should get together. Especially people should listen to the goalkeepers’ point of view, because the ball isn’t doing them any favours.”

Well, what’s a World Cup without controversy? We’ll see what develops as the tournament continues. Personally, I hate to see athletes blaming the equipment when things don’t go their way.

Meanwhile, the way that they make the ball is very cool. Take a look below.

Click over to  the design magazine Abitare for more about the ball and links to other videos.