I suspect that many casual students of American literary history forget that Jonathan Edwards and Benjamin Franklin were contemporaries. Edwards was born in 1703 and died prematurely in 1758 after being inoculated for smallpox; Franklin was born in 1706 and lived until 1790. 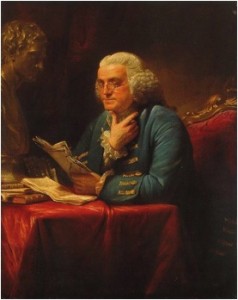 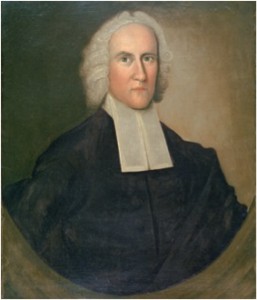 Edwards is generally regarded as the last Great American Puritan thinker, while Franklin is thought to be the very embodiment of the American Enlightenment. The two men (along with Thomas Jefferson and Joel Barlow) will be the subject of two lectures tomorrow in my American Literature I class. (We’re making up a class that was canceled during the snow day a couple of weeks ago.) I’ll be presenting Edwards as a man trying to retrofit the old-time religion so that it can harness but not be destroyed by the new intellectual technology of John Locke and the Enlightenment. Edwards had read Locke’s Essay Concerning Human Understanding (1690) and, according to his disciple Samuel Hopkins, derived more satisfaction and pleasure from reading the essay “than the most greedy Miser in gathering up handsful of Silver and Gold from some new discover’d Treasure.” Franklin, meanwhile, will emerge as a man firmly committed to moving ahead with the new intellectual technology, interested in harnessing but ultimately appropriating the residual power of the old-time religion in order to promote Enlightenment values.

Pairing Edwards and Franklin this way allows me to present the mid-eighteenth-century as a case study in the dynamics of dominant, residual, and emergent cultures — my own appropriation of the work of Raymond Williams, which serves as one of the framing ideas of the course.

Tomorrow’s playlist will include: Stevie Wonder, “Have a Talk with God”; Led Zeppelin, “Stairway to Heaven”; Thomas Dolby, “She Blinded Me with Science”; T. Rex, “Children of the Revolution”; and Bruce Springsteen, “Independence Day.”