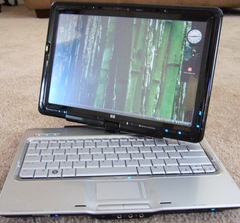 I’ve been using my Hewlett-Packard tx2500z Tablet for a little over two months now. I haven’t found the time to learn how to make best use of the tablet features, but I’m happy with the machine — especially now that I’ve solved an annoying problem with the audio, which would often stutter when I was playing music with PowerPoint slides or streaming audio from the web. One review of the machine noted the problem and hoped that a “more mature sound driver” would solve the problem. I would check periodically, but no new driver has appeared.

And then I found another review, from studentbuyingguide.com, whcih offered a solution that has worked for me:

Some people have reported issues with stuttering during DVD and MP3
playback, I also got a little of this.  There is a simple fix though,
it turns out to be a conflict with the wireless card and to resolve
just do the following: Wi-Fi. In device manager, go to Control Panel
> System > System Properties > Hardware > Device Manager
> Network adapters -> Broadcom adapter -> Advanced ->
Disable Bands -> Disable 802.11a.

I don’t use 802.11a wireless, so disabling it posed no problem. And my audio hasn’t stuttered since.