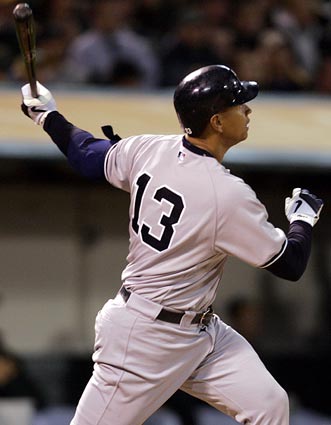 I’m watching the fourth game of the World Series, which the Red Sox are leading 4-1 going into the bottom of the eighth. They already lead the Series 3-0, so a win tonight would win it all.

I’d been telling my friends who cared that I thought that whichever team won the first game of the Series would win the second and eventually the whole thing (though I was agnostic about the question of a sweep).

I figured that all the talk about how the eight-day layoff might affect the momentum of the Rockies, who had won 21 of 22 games going into the Series (including all of their playoff games), would, in fact, affect the Series.

If the Rockies were to win game one, they (and the Red Sox) would believe that their momentous streak was continuing and that would propel them to victory in the second game. If, however, the Red Sox, were to win, they (and the Rockies) would believe all the doom-sayers who predicted that the layoff would kill the momentum (as had been the case with the Detroit Tigers last year) — effectively killing the momentum.

The impact of psychological factors on a baseball team is not to be underestimated. Just ask the Mets.

Meanwhile, Fox has just announced that agen Scott Boras has told them that his client Alex Rodriguez would in fact be opting out of his contract with the Yankees in order to become a free agent. A-Rod has ten days after the conclusion of the World Series to make his decision about whether to opt out. Boras apparently cited A-Rod’s uncertainty about the future of the Yankees — about the managing situation, about whether the team would be able to re-sign its prominent free agents, about the “ownership transition” — as the factors in his decision.

I can’t say I’m surprised. A-Rod proves himself to be the solo operator that I described below.

Hmm … the Rockies have just hit a two-run homer to cut the lead to one run. It ain’t over ’til it’s over? We’ll see … about both the Rockies and the Rod.

The following day Major League Baseball criticized both Boras and Rodriguez for the timing of their announcement. MLB’s chief operating officer, Bob DuPuy, wrote in an e-mail to the Associated Press: “We were very disappointed that Scott Boras would try to upstage our premier baseball event of the season with his announcement. There was no reason to make an announcement last night other than to try to put his selfish interests and that of one individual player above the overall good of the game. Last night and today belong to the Boston Red Sox, who should be celebrated for their achievement, and to the Colorado Rockies, who made such an unbelievable run to the World Series.”

The Yankees’ brass maintained that they would not negotiate with Rodriguez once his decision to opt-out of his contract with them was made official. Hank Steinbrenner said, “The bottom line is … do we really want anybody that really doesn’t want to be a Yankee?” He pointed to Derek Jeter, who, “since he was a little kid, all he ever wanted to do was play shortstop for the Yankees. That’s what we want.” A-Rod may want to be a Yankee, but clearly it isn’t what he wants most.

One of my close friends, a diehard Yankee fan, lays the blame at Boras’s doorstep. “I think the solo operator is Scott Boras,” he wrote in an e-mail. “A-Rod is his cyborg, whom he rents out to the highest bidder.”