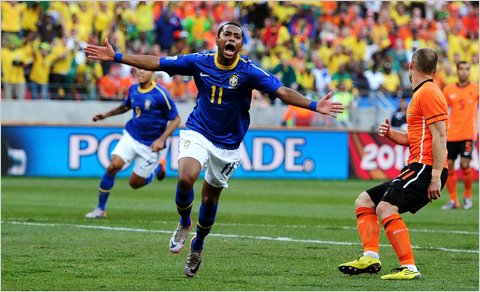 Robinho scores "as unfussily as a man peeling a ripe banana."

In most of my classes on literature, I teach my students to recognize, analyze, and even make use of figures of speech, literary devices that involve unusual uses of language in order to create deeper meanings. Figures of speech are typically divided into two categories: tropes (sometimes called “figures of thought”) and rhetorical figures. Roughly speaking, a trope is a figure of speech that alters the meanings of the words it employs, while a rhetorical figure makes use of standard meanings but uses words in a way that creates unexpected effects.

Tropes often involve a comparison between two unlike things. The two tropes that most students learn first are simile and metaphor. To refresh your memory: a simile is a comparison two unlike things (referred to as a “tenor” and a “vehicle”) using the words “like” or “as.” In a metaphor, the association between tenor and vehicle is made without the words “like” or “as.” A metaphor, therefore is a trope of substitution in which the tenor is represented or figured by the vehicle. So, for example, in the sentence “Kaká is a gazelle,” “Kaká” is the tenor, and “gazelle” is the “vehicle.”

We can change the sentence to make use of a simile: “Kaká runs like a gazelle.” The tenor and vehicle are the same, but there is something different about the association between them. In the metaphor, the two things are superimposed on one another; in the simile, the two things are kept apart conceptually.

Sometimes a metaphor is only “implied”: “Robinho sliced through the Dutch defense.” In this case we have only the vehicle, the slicing; the tenor (the act of running) is implied.

I’m starting a new series of posts that point out figures of speech in everyday uses. Today’s figure of speech is a simile that would have made the mystery novelist Raymond Chandler, who was famous for his very elaborate similes, proud. It comes from the Guardian‘s account of the Dutch soccer team’s victory over Brazil in this morning’s World-Cup quarter-final:

The change may have had some influence on the opening goal, which came in the 10th minute when Melo, from inside his own half, measured a straight ball that invited Robinho to run behind the two centre-backs and stroke the ball past Maarten Stekelenburg from 15 yards as unfussily as a man peeling a ripe banana. (Emphasis added.)

I’m not sure I understand what it means exactly, but it sure is picturesque.