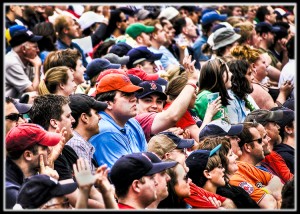 Teddy Kennedy’s seat will be occupied by a Republican who will make it his personal mission to scuttle the healthcare initiative.

Today I’ve found myself thinking about my years in the Boston-Cambridge area. Back in the day, we used to go every now and then to the bleachers at Fenway Park, to take in the game, be boisterous, and enjoy the old-time baseball atmosphere. I didn’t mind too much about basically being the only person of color. There were times when it seemed to me that the nearest African American was future Hall-of-Famer Jim Rice down in left field.

I remember one bleacher moment particularly vividly. My friend C. B., a lifelong, diehard Democrat, turned to me and said: “Take a look around. This has got to be one of the most liberal states in the union, but you sure wouldn’t know it looking at all the meatheads sitting around us.”

For me, the turning point in Barack Obama’s campaign, the moment that I knew for sure that he was the candidate for me, was the moment when the late Teddy Kennedy endorsed Obama.

Right now, I am amazed at the cosmic irony of the Democrats’ losing Kennedy’s seat and thereby squandering the opportunity to pass the healthcare reform that was Kennedy’s fondest hope.

It makes me wonder whether we aren’t in fact just the playthings of the gods.

[Thanks to greaterbostonphotography.com for the photo of the bleacher creatures above. Click here to go to the original location and see the wry caption that accompanies the photo.]