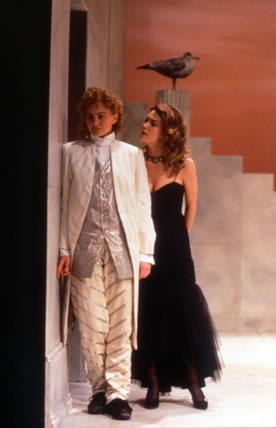 Over the years I’ve been fortunate enough to have seen many productions of Shakespeare’s Twelfth Night. My favorite has always been the production directed by Andrei Serban for the American Repertory Theater in Cambridge, Massachusetts, in the fall of 1989. The production starred Cherry Jones as Viola and Diane Lane as Olivia (both pictured at right), with a marvelous supporting cast that included ART stalwarts Thomas Derrah (Feste) and Jeremy Geidt (Sir Toby). The Romanian director has always been known as an experimentalist, and his Twelfth Night featured Sir Toby watching cartoons on television and Sebastian meeting Antonio in a gay bar for sailors with an actor dressed as Shakespeare sitting in the back drinking a beer and taking notes.

Last night, I saw a production of the play that was equally memorable, a wildly cosmopolitan version of the play at the Brooklyn Academy of Music’s Next Wave Festival. It was directed by Declan Donnellan and designed by Nick Oremerod, who are the founders and co-Artistic Directors of the Cheek by Jowl Theater Company, which now makes it home at the Barbican Centre in London. What makes it "wildly" cosmopolitan, however, is the fact that it is performed in Russian with English titles. The titles are taken from Shakespeare’s text, but according to a Russian student who accompanied me, the Russian was far more verbose and far less "literary" than the titles. The production was originally produced by the Chekhov International Theatre Festival in 2003; three years earlier Donnellan and Ormerod had formed a sister company in Moscow (Donnellan jokingly refers to it as "Cheek by Jowlski").

I’d just been making the argument, earlier in the day during the lecture for my "Conversations of the West" class that as the students read Hamlet over the weekend, they should think about the ways in which Hamlet suggests that Aristotle may have underestimated the importance of diction to the succesful creation of tragedy onstage. In the Poetics, Aristotle valorized plot above all, but is plot the most powerful element of Hamlet, I asked. Is there not something in the way Shakespeare puts words together in all of those marvelous speeches ("To be or not to be …"; "O! what a rogue and peasant slave am I!"; "The play’s the thing / Wherein I’ll catch the conscience of the king.") that is crucial to the play’s evocation of tragic experience?

And here I was watching a production of Twelfth Night whose implicit premise was that Shakespeare’s play can transcend the language in which it is written. Ben Brantley in it this way in his review for the New York Times:

The glorious surprise of this ”Twelfth Night” … is in how it finds an alchemical substance in Shakespeare that transcends the verbal. … Mr. Donnellan and Mr. Ormerod … make the heretical case that the essence of Shakespeare isn’t exclusively linguistic. The words, it seems, are but steppingstones to a universal pattern of images and insights about human behavior and the perplexing world that thwarts and shapes it. Shakespeare’s first language, it would seem, is not English, after all; it’s Theater.

Well, it worked marvelously, because the actors were superbly evocative in both speech and gesture; the elegantly minimalist set and lighting created beautiful tableaux and arresting moments; and Donnellan’s direction emphasized physical comedy, constant movement, and quick pacing. Frankly, I’m not sure it would have worked with a play like long, wordy play Hamlet. 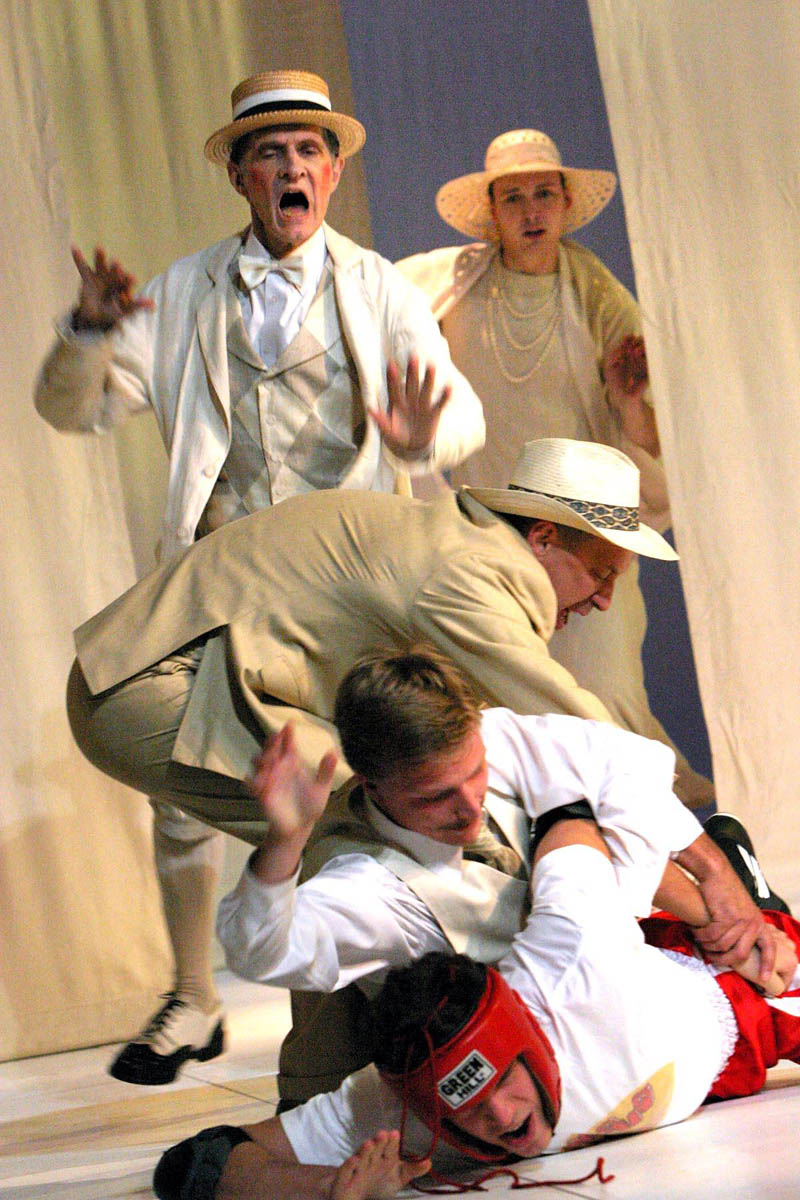 The all-male cast meant that the production could draw on some of the ambiguities of Shakespeare’s original stagings, which featured men playing women playing men in plays like Twelfth Night and As You Like It. The "women" in this production — the Andrey Kuzichev as a lithe Viola; Alexey Dadonov as a straight-backed, almost regal Oliva; and Ilia Ilin as a limber Maria — were uniformly persuasive. The ambiguities of the final recognition scene came across beautiful (especially in the tense shrug offered by Orsino [Vladimir Vdovichenkov] after he has mistaken Sebastian [Sergey Mukhin] for Viola/Cesario. Ormerod’s design emphasized the contrasts of black and white, with black dominating the first act, full as it is of mourning and melancholy, and white dominating the second, with its hopes for renewal and rebirth — with a stunning intrusion of black in the person of Malvolio at the very end. Every now and then, Donnellan would freeze the action during an aside by a character, as if to suggest the momentary imposition of order amidst chaos, but these moments seem, in retrospect, motivated by the desire to build up to the final freeze-frame, Malvolio’s "I’ll be revenged on the whole pack of you," which Donnellan turns into the final spoken line of the play. While the rest of the cast, dressed in off-white costumes, is revelling to Feste’s lounge-lizard version of "the rain it raineth everyday," Malvolio returns, clad once again in the butler’s black tuxedo, to serve champagne and offer his promise of revenge — as an aside to the audience. I’ve never seen it played this way, but it made for a stunning theatrical moment.

My students seemed to enjoy the play, though almost none of them seemed to have ben familiar with it beforehand. I found myself wondering what it what be like to encounter Twelfth Night for the first time in this way. What was getting across to them? And how different was it from what would have gotten across were the watching a standard, untranslated production of the play. Did they, paradoxically, get more out Shakespeare’s text last night because they were reading it as they watched, rather than listening to it? I also wondered how different an experience my Russian student in attendance was having. Did the play she was watching seem more contemporary because of the translation, with the titles seeming like a bad translation written by non-native speakers of English? (An effect enhanced, perhaps, by the fact that the titles were full of typos.)

What I found myself wondering, finally, was lost in the translation. And what was gained?