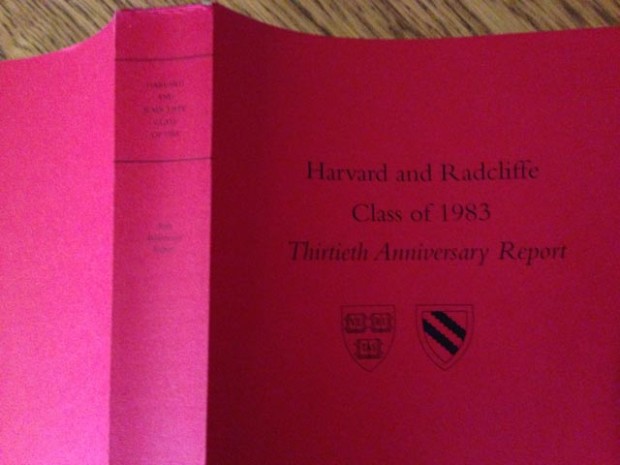 I’m on my way to my thirtieth college reunion in Cambridge, Massachusetts. My, oh my, how time flies! This trip marks the furthest I’ve had to travel for a reunion, but this time I’ll be part of the program. I’m giving a brief TED-style talk tomorrow, as part of a panel called “1983 Thinks Big,” modeled on a series of panels known as “Harvard Thinks Big.”

Before each reunion, the Harvard alumni office produces a “red book,” a class report in which members of the reunion class are invited to write about what they’ve been up to since the last reunion.

Since our last reunion in 2008, my life has changed in ways I could never have foreseen. Here’s what I wrote for the red book:

Late in the summer following our last reunion, when John McCain chose Sarah Palin to be his running mate and the Republicans received their post-convention bounce, my wife, Deborah, and I decided we needed an exit strategy in case the unthinkable happened. We’d need to find a cosmopolitan space, since the United States would clearly be something other than cosmopolitan if McCain and Palin could be voted into the White House. Canada? Switzerland? “What about Abu Dhabi?” Deb asked, remembering that NYU had announced plans the year before to build a campus there on Saadiyat Island. Looking at one of Abu Dhabi’s official websites, we noted that “cosmopolitan” was one of the words that emirate was using to describe itself and its aspirations.

I called the dean of the College of Arts and Science to make some inquiries, and one thing quickly led to another. I soon joined a committee that was responsible for putting together the initial Arts and Humanities curriculum and then hiring the first members of the standing faculty; visited Abu Dhabi for the first time and gave a lecture on Moby-Dick and cosmopolitanism that led to invitations to participate in “candidate weekends,” during which the finalists among student applicants were flown to Abu Dhabi for a mutual look-see; and ultimately was appointed in Spring 2010 to serve as Associate Dean of Humanities for NYUAD. Our family moved there in August 2011, and Deborah and I are both teaching at courses in world literature to a truly amazing collection of undergraduates.

The idea behind NYUAD was to create a small college the size of Swarthmore, with an international student body, coupled with a robust and well-funded research institute, thereby drawing on the best aspects of both the small liberal arts college and the research-oriented university. NYU Abu Dhabi is a fully-fledged unit of the university, equal in standing to the Faculty of Arts and Science, offering a degree that will be a real NYU degree (in contrast, say, to Yale’s arrangement in Singapore). So far, after three years, it’s been successful beyond what we first hoped in 2008.

For Deborah and me, being a part of the NYU Abu Dhabi project has opened up new pedagogical and research challenges. Deborah has been writing regularly for the English-language paper, The National, and is working on a book project about life in the Emirates. I’m finishing up my stint as an administrator and looking forward to developing two new “Foundations of Literature” courses, and co-directing a big teaching, research, and performance initiative around the idea of “Global Shakespeare.” Deb and I run the Arts & Humanities journal Electra Street (named after the street on which most of the NYUAD community presently lives), which will have made its print debut shortly before you read this. And we’re co-editing a volume of the new Oxford History of the Novel in English that deals with American Fiction after 1940. Our boys, L. (almost age 13) and C. (age 9), are attending a British school, where they’re enjoying a much more rigorous curriculum than they would have had back in New York, and they’re learning Arabic (something that Deb and I hope to do before we leave the region). Deb and I have been writing about our experiences on our blogs patell.net and mannahattamamma.net.

Before relocating to Abu Dhabi, I managed to finish work on a collection of essays called The Cambridge Companion to the Literature of New York (with my colleague Bryan Waterman) and a book on the Rolling Stones’ Some Girls for Continuum’s 33 1/3 series. I’m turning in a long overdue book called “Marginal, Emergent, Cosmopolitan: An Alternative History of Late-Twentieth-Century U.S. Multicultural Literatures” to NYU Press as I write this entry, and I’m looking forward to completing a book project called “Cosmopolitanism and the Literary Imagination,” which is based on a course that I’ve been offering at NYUAD for the past two years.

NYUAD offers a major called “Arab Crossroads Studies,” and we’re finding that Abu Dhabi really has become a crossroads for us. It’s enabled us to meet and work with people from all over the world (our students presently come from about 90 countries, and the US students only make up a plurality of about 20 percent). And it’s enabled us to travel extensively. Our family visited London and Paris on the way to Abu Dhabi in 2011, and since then we’ve visited Jordan, India, Kenya (twice), the Maldives, Oman, and Sri Lanka. My son Liam has been on class trips to Ephesus and Flaine, and I’ve done work-related travel to Amsterdam, Beirut, Canberra, London, Seoul, and Shanghai. We’re hoping to make it to Egypt before too long.

I’m grateful to Deborah, Liam, and Caleb for being willing to embrace the opportunities that NYU Abu Dhabi has presented to us. It hasn’t always been easy, and they’ve been troupers. For now, life in NYU Abu Dhabi is working for us, and I’m glad that our children are able to have a kind of globalized upbringing that is very different from Deborah’s and mine.

I wouldn’t be surprised if we were still in Abu Dhabi when it’s time to write the next reunion report.

So a final thank-you. To John McCain and Sarah Palin.