Less Disappointed in The Daily Beast 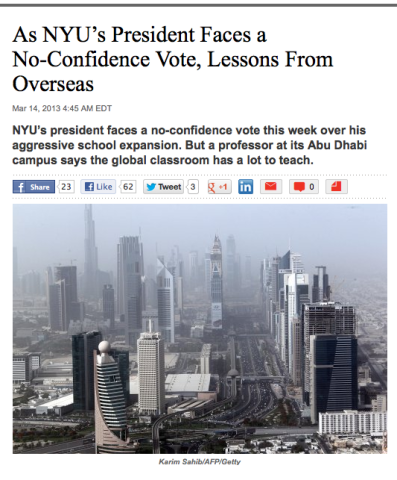 Another piece of recent journalism that I found profoundly disappointing was Anya Kamentz’s piece “Should Top U.S. Colleges Expand Overseas?” published online in The Daily Beast on March 5. If you look for the piece on the Beast website, you might encounter this headline: “Sellout U.”

From my perspective, the piece makes overly broad generalizations about the ways in which a number of US universities and colleges have tried to globalize their programs and makes little to no attempt to understand the ways in which effort is unique. This habit of thought led her to claim in a private correspondence and (I’m sure) in completely good faith that the following paragraph is not misleading:

NYUAD trumpets its 2 percent acceptance rate and high SAT scores. But a professor I spoke with at Carnegie Mellon Qatar presented a different picture. “The students, let me see, how to phrase that,” he said, hesitating. “Some are outstanding, a pleasure to work with. Others are less outstanding.” Given the limited number of applications that the overseas campus receives, he said, it’s impossible to recruit the same caliber of students that are found in the U.S.

Was it immediately clear to you that the students about whom the Carnegie Mellon Qatar professor was speaking are not the students whose qualifications “NYUAD trumpets”? Reading that paragraph, wouldn’t you believe that NYUAD has received a limited number of applications and has had trouble recruiting the same caliber of students that are found in the U.S.? Nothing could be further from the truth. NYUAD has had a ton of applications and the caliber of the students is exceptionally high. (To get a sense of the numbers, take a look at the 2012 and 2013 press releases about the admissions process.) This paragraph is typical of the article’s general reporting technique.

I’m glad to say that the editors of the Beast saw fit to balance their account of NYUAD by publishing this piece by my NYUAD colleague, Oxford History of the Novel in English co-editor, and wife, Deborah Lindsay Williams. Perhaps I’m biased, but I think it does a pretty good job of capturing the magic of the place.

In case you’re confused by the two comments left by “jamesohearn,” you should know that when the piece first went up, it was accompanied by a picture not of Abu Dhabi but Dubai (as shown above), a bit of carelessness similar to that shown by The Atlantic recently (see my post “Disappointed in The Atlantic“). The error was rectified reasonably quickly, only to have another introduced: the use of the non-existent term “Emirian,” which sounds to me like a name from Star Trek. Luckily, that’s been fixed too.

You can find Williams’s account of the genesis of the piece (as well as a longer version of it) on her website mannahattamamma.com.