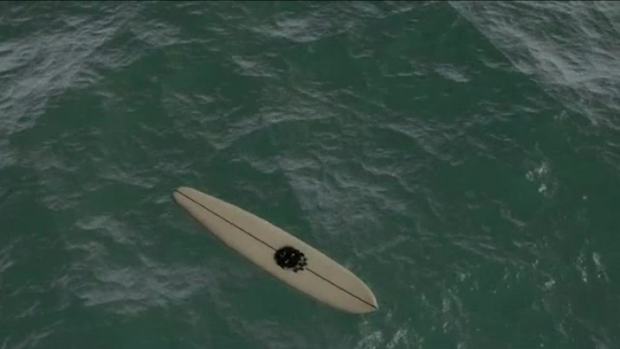 And so, finally, we reach the end.

When Moby-Dick was published in London by Richard Bentley on October 18, 1851 (using Melville’s original title, The Whale), it seemed to end with the haunting final words of Chapter 135:

Now small fowls flew screaming over the yet yawning gulf; a sullen white surf beat against its steep sides; then all collapsed, and the great shroud of the sea rolled on as it rolled five thousand years ago.

“The Epilogue,” which explains how Ishmael came to survive the wreck, was missing! The final chapter was followed by the “Etymology” and “Extracts” sections, which Melville had intended to precede the book, as they would in the American edition published on November 14. In the Norton Critical Edition

of the novel, Hershel Parker surmises, “Most likely, Bentley had told his compositors to put all the etymology and extracts, all that distracting junk, in the back of the third volume, and in the process of shifting things around the single sheet (half a page of type) had gotten lost.”

Believing that Melville had disobeyed crucial novelistic conventions, the first British reviews, which appeared in the London Spectator and the Athenaeum, savaged the novel, and these two reviews circulated in the United States just as the novel was published there.  The Athenaeum wrote, “The style of his tale is in places disfigured by mad (rather than bad) English, and its catastrophe is hastily, weakly, and obscurely managed.” The Spectator commented, “His catastrophe overrules all rule: not only is Ahab, with his boast’s-crew, destroyed in his last desperate attack upon the white whale, but the Pequod herself sinks with all oh board into the depths of the illimitable ocean. Such is the go-ahead rule.” Because neither review specified precisely what was wrong with the novel’s ending, so that Americans readers were immediately prejudice against it — despite the fact that their edition had the epilogue!

Once you’ve read or heard the epilogue, ask yourself this. It is preceded by an epigraph, a line from the Book of Job: “And only I am escaped to tell thee.” At the opening of Job,we learn that “There was a man in the land of Uz, whose name was Job; and that man was perfect and upright, and one that feared God, and eschewed evil” (1:1). Satan, who has been wandering the earth, appears to God and challenges the idea that Job is “perfect and upright”: here Satan is not the Christian “devil,” but rather a kind of prosecutor — what today we might call a “devil’s advocate” — whose role is to keep humankind honest. Satan suggests that Job loves God only because he fears him: “Hast not thou made an hedge about him, and about his house, and about all that he hath on every side? thou hast blessed the work of his hands, and his substance is increased in the land. But put forth thine hand now, and touch all that he hath, and he will curse thee to thy face” (1:10-11). God agrees to let Satan test Job: “Behold, all that he hath is in thy power; only upon himself put not forth thine hand.”

So Job is visited by a series of catastrophes, which destroy his property and family. He is smitten by “sore boils from the sole of his foot unto his crown.” Still he refuses to curse God. He does, however, wish that he could have an explanation for what is happening him. The Book of Job is a classic example of dramatic irony: we the reader know the explanation but Job does not. And he never will. God appears to him and refuses to tell him, insisting instead on the incommensurability between the divine and the human:

Then the LORD answered Job out of the whirlwind, and said, Who is this that darkeneth counsel by words without knowledge? Gird up now thy loins like a man; for I will demand of thee, and answer thou me. Where wast thou when I laid the foundations of the earth? declare, if thou hast understanding. Who hath laid the measures thereof, if thou knowest? or who hath stretched the line upon it? Whereupon are the foundations thereof fastened? or who laid the corner stone thereof; When the morning stars sang together, and all the sons of God shouted for joy? (38:1-7)

The Book of Job is a crucial intertext for Moby-Dick and not simply because God uses the leviathan as an example of his power:

Canst thou draw out leviathan with an hook? or his tongue with a cord which thou lettest down? Canst thou put an hook into his nose? or bore his jaw through with a thorn? Will he make many supplications unto thee? will he speak soft words unto thee? Will he make a covenant with thee? wilt thou take him for a servant for ever? Wilt thou play with him as with a bird? or wilt thou bind him for thy maidens? Shall the companions make a banquet of him? shall they part him among the merchants? Canst thou fill his skin with barbed iron? or his head with fish spears? Lay thine hand upon him, remember the battle, do no more.
Behold, the hope of him is in vain: shall not one be cast down even at the sight of him? None is so fierce that dare stir him up: who then is able to stand before me?(41:1-10)

At the end of the Book, Job receives material satisfaction — all he is lost is restored to him in greater quantity — but not intellectual satisfaction. The Book of Job reinforces the idea that the the divine remains forever inscrutable to humankind — which is one of the animating ideas behind Moby-Dick.

The line that Melville quotes at the start of the epilogue formulaic line with which each of the four messengers who relays catastrophic news to Job concludes his speech.

“The Epilogue” is read by by poet Mary Oliver. The accompanying illustration is the digital (!) video Isolation Tank (2010-11; single-channel HD video/sound installation) by Gary Hill (still shown above).Visit the “Big Read” site to watch it.