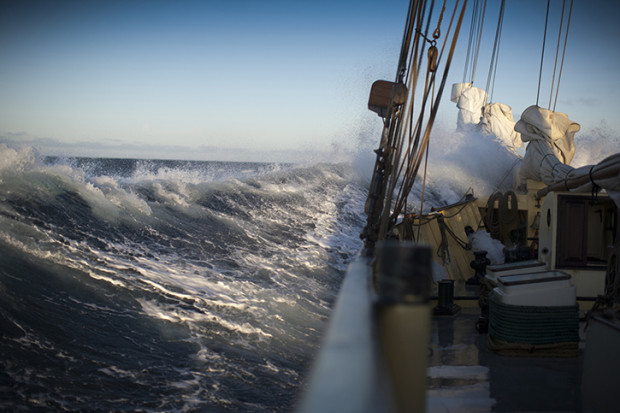 It’s the Pequod‘s final gam, and it’s a bleak one. The “most miserably named” whaleship Delight has, like the Rachel, encountered Moby Dick, and the encounter has brought death. Ishmael gives us this striking image of the destroyed whale-boat that the Delight is carrying:

As she drew nigh, all eyes were fixed upon her broad beams, called shears, which, in some whaling-ships, cross the quarter-deck at the height of eight or nine feet; serving to carry the spare, unrigged, or disabled boats.

Upon the stranger’s shears were beheld the shattered, white ribs, and some few splintered planks, of what had once been a whale-boat; but you now saw through this wreck, as plainly as you see through the peeled, half-unhinged, and bleaching skeleton of a horse.

Ahab worries that the Delight has killed Moby Dick, but that ship’s captain declares, “The harpoon is not yet forged that will do that.” Ahab swears that he has one — “tempered in blood, and tempered by lightning” — that will. As the Pequod turns away to resume its course, the Delight buries one of its crewmen at sea — the only one of five killed by the white whale whose body was discovered. Might “some of the flying bubbles” from the corpse’s entry into the water “have sprinkled [the Pequod‘s] hull with their ghostly baptism.”

Ahab’s ship turns away, “its life buoy-coffin” clearly visible to the crew of the Delight. Intended to be a life-buoy, there’s no disguising what it once was:

“Ha! yonder! look yonder, men!” cried a foreboding voice in her wake. “In vain, oh, ye strangers, ye fly our sad burial; ye but turn us your taffrail to show us your coffin!”

“The Pequod Meets the Delight” is read by Daniel Allen. The accompanying image, 80deg north, is by Alex Hartley.