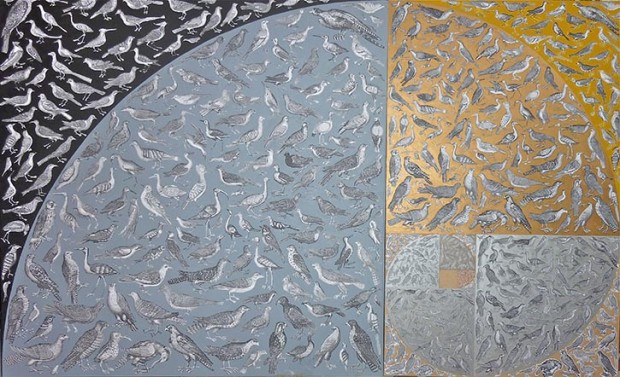 Those of you who were inclined to doubt whether Ishmael’s depiction of Ahab and Pip is meant to evoke the relationship between King Lear and his fool will be pleased to find that “The Hat” opens with an actual allusion to Shakespeare’s great play:

And now that at the proper time and place, after so long and wide a preliminary cruise, Ahab, — all other whaling waters swept — seemed to have chased his foe into an ocean-fold, to slay him the more securely there; now, that he found himself hard by the very latitude and longitude where his tormenting wound had been inflicted; now that a vessel had been spoken which on the very day preceding had actually encountered Moby Dick; — and now that all his successive meetings with various ships contrastingly concurred to show the demoniac indifference with which the white whale tore his hunters, whether sinning or sinned against; now it was that there lurked a something in the old man’s eyes, which it was hardly sufferable for feeble souls to see. As the unsetting polar star, which through the livelong, arctic, six months’ night sustains its piercing, steady, central gaze; so Ahab’s purpose now fixedly gleamed down upon the constant midnight of the gloomy crew. It domineered above them so, that all their bodings, doubts, misgivings, fears, were fain to hide beneath their souls, and not sprout forth a single spear or leaf. [Emphasis added.]

Here’s the relevant passage from the great storm scene in Lear (Act III, Scene ii); the speaker is Lear:

Let the great gods,
That keep this dreadful pother o’er our heads,
Find out their enemies now. Tremble, thou wretch,
That hast within thee undivulged crimes,
Unwhipp’d of justice: hide thee, thou bloody hand;
Thou perjured, and thou simular man of virtue
That art incestuous: caitiff, to pieces shake,
That under covert and convenient seeming
Hast practised on man’s life: close pent-up guilts,
Rive your concealing continents, and cry
These dreadful summoners grace. I am a man
More sinn’d against than sinning.

Shakespeare’s scene depicts Lear at the moment in which he becomes mad; “The Hat” depicts Ahab at the moment when Ahab’s point of view completely takes over the narrative. It’s often said that one of the things that is distinctive about the novel’s narration is its alternation between the comic digressions of Ishmael and the tragic-epic mode of the chapters devoted to depicting Ahab’s subjectivity. Now it is that latter mode that takes over. Ishmael reports that “all humor, forced or natural, vanished. Stubb no more strove to raise a smile; Starbuck no more strove to check one. Alike, joy and sorrow, hope and fear, seemed ground to finest dust, and powdered, for the time, in the clamped mortar of Ahab’s iron soul.”

Things are coming to a climax.

Fedallah too is transformed: “an added, gliding strangeness began to invest the thin Fedallah now; such ceaseless shudderings shook him; that the men looked dubious at him; half uncertain, as it seemed, whether indeed he were a mortal substance, or else a tremulous shadow cast upon the deck by some unseen being’s body.” Fedallah, you’ll remember, has made some prophecies. Is his “shuddering” due to their imminent fulfillment? Ahab and “the Parsee” are always on deck, always watching:

Though such a potent spell seemed secretly to join the twain; openly, and to the awe-struck crew, they seemed pole-like asunder. If by day they chanced to speak one word; by night, dumb men were both, so far as concerned the slightest verbal interchange. At times, for longest hours, without a single hail, they stood far parted in the starlight; Ahab in his scuttle, the Parsee by the mainmast; but still fixedly gazing upon each other; as if in the Parsee Ahab saw his forethrown shadow, in Ahab the Parsee his abandoned substance.

it is clear to the crew that the Parsee is in Ahab’s thrall, but it also becomes evident that Ahab ceases to trust the crew to be sufficient watchful, after a few days elapse without a sighting of Moby Dick. So Ahab decides that he will be the one to see the white whale first — “Aye! Ahab must have the doubloon!” — and a contraption is rigged that raises him to the top of the royal mast. Pointedly, Ahab assigns to Starbuck the task of raising him and securing the rope, as Ishmael puts it, “freely giving his whole life into such an otherwise distrusted person’s hands.” But perhaps it is a sign of Ahab’s final domination of Starbuck: both men know that Starbuck will execute the task he has been assigned, and there will be no mishap.

And then another portent: the “first time Ahab was perched aloft,” he is pestered by” one of those red-billed savage sea-hawks which so often fly incommodiously close around the manned mast-heads of whalemen in these latitudes.” It’s a common enough occurrence, but now nothing that occurs can be seen as simply “common”: “But with his gaze fixed upon the dim and distant horizon, Ahab seemed not to mark this wild bird; nor, indeed, would any one else have marked it much, it being no uncommon circumstance; only now almost the least heedful eye seemed to see some sort of cunning meaning in almost every sight.”

But then the bird steals Ahab’s hat and far in the distance, in what can only be taken to be an ill omen, drops it into the sea …

“The Hat” is read by BBC4 announcer Diana Speed. The accompanying image, Come you lost atoms to your centre draw is by Graham Day. It is a work-in-progress collage of xeroxed paper of 18th century engravings, metallic paint, watercolour on fibreboard (size: 105 x 60 cm), which is used courtesy of Rose Issa Projects.