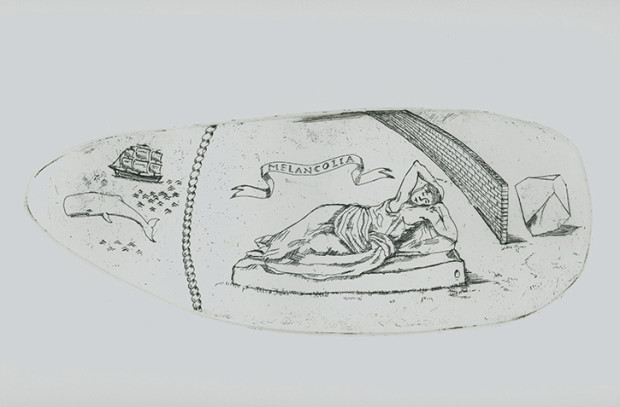 Of all the gams that Ishmael describes in the novel, this meeting with the Rachel is the most fraught — with emotion for the characters and with significance for the narrative. Here the Pequod encounters a ship that, the day before, encountered Moby Dick and suffered terrible losses as a result. Missing is a whaleboat containing the twelve-year-old son of Gardiner, the Rachel‘s captain, who begs Ahab to join him in the search. It is an unusual request — “Who ever heard of two pious whale-ships cruising after one missing whale-boat in the height of the whaling season?” Stubb asks Flask as they overhear the captains’ conversation. When the reason is revealed, Stubb exclaims, “We must save that boy,” though the old Manxman has already proclaimed the boy and all the rest of the missing sailors drowned — that’s his explanation for the eerie sounds that the Pequod heard in “The Life-Buoy.”

Knowing that his quarry is so close, Ahab —  heartlessly and predictably, though, as Ishmael describes it, perhaps not without remorse — refuses, and the Pequod continues on its course.

In the final line of the chapter, Ishmael gives the name of Gardiner’s ship an allegorical meaning, drawn from the Bible: “But by her still halting course and winding, woful way, you plainly saw that this ship that so wept with spray, still remained without comfort. She was Rachel, weeping for her children, because they were not.” For Ishmael, the ship’s name brings to mind these verses from chapter 31 of the Book of Jeremiah:

Rachel (“Rahel” in the King James Version) is traditional interpreted within the Judaic tradition to stand in for the mother of the Hebrew people. This moment is invoked in the New Testament in Matthew 2:16-18:

16: Then Herod, when he saw that he was mocked of the wise men, was exceeding wroth, and sent forth, and slew all the children that were in Bethlehem, and in all the coasts thereof, from two years old and under, according to the time which he had diligently inquired of the wise men.
17: Then was fulfilled that which was spoken by Jeremy the prophet, saying,
18: In Rama was there a voice heard, lamentation, and weeping, and great mourning, Rachel weeping for her children, and would not be comforted, because they are not.

Gardiner appeals to Ahab: “Do to me as you would have me do to you in the like case. For you too have a boy, Captain Ahab — though but a child, and nestling safely at home now — a child of your old age too — Yes, yes, you relent; I see it — run, run, men, now, and stand by to square in the yards.” But he’s wrong: Ahab does not relent. Biblical reasoning has no effect on him — no surprise to us by now — nor, apparently, does the invocation of his wife and child, though we will see Starbuck try one more time to appeal to Ahab’s family feeling in the wonderful chapter called “The Symphony.”

“The Pequod Meets the Rachel” is read by the artist Alice Herrick. The accompanying image, Melancholia (2008) is by Gavin Turk.