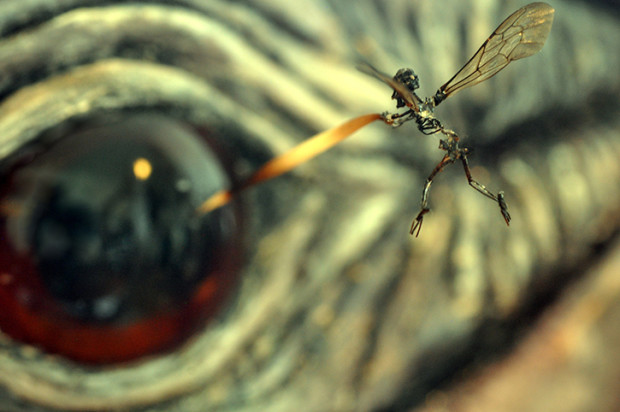 Unbeknownst to Ahab and his crew, the electrical storm through which the Pequod has just passed has reversed the polarity of the ship’s compass so that the Pequod is now sailing West — homeward — instead of East — toward Moby Dick. It’s as if nature itself is urging the ship to avoid encountering the white whale. Looking at the sun, Ahab realizes what has happened and remains undaunted. He fashions his own compass out of the tip of a lance and a needle, and it points in the right direction. The crew can’t believe it: “‘Look ye, for yourselves, if Ahab be not the lord of the level loadstone! The sun is East, and that compass swears it!” The doubting Thomases look and find that Ahab speaks truly.

The chapter continues the association of Ahab with fire. At the outset, as the Pequod sails on a sea made golden by the sun’s light, Ahab likens the Pequod to the “sea-chariot of the sun” (which would make him Apollo). At the chapter’s end, Ishmael writes, “In his fiery eyes of scorn and triumph, you then saw Ahab in all his fatal pride.” Fatal pride is the mark of a tragic hero. Is that what Ahab will turn out to be? Or is “hero” not quite the right word?