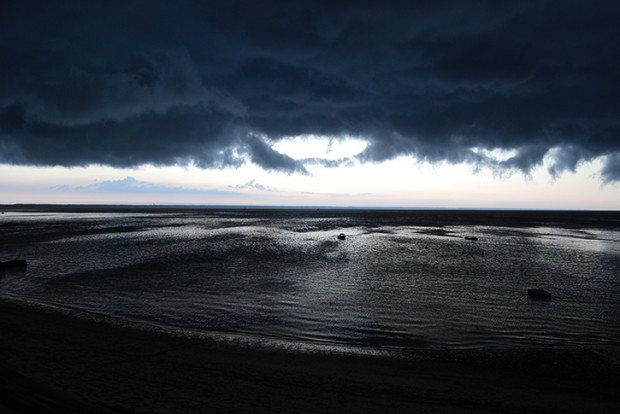 This chapter poses a familiar ethical dilemma: is it morally acceptable to kill one man in order to save many?

The typhoon abates, new sails are reefed, and Starbuck goes down to Ahab’s cabin to inform the captain that they are back on course. On his way, he sees Ahab’s muskets and picks up the very one which Ahab threatened him some chapters back. And then he conceives what Ishmael describes as “an evil thought; but so blent with its neutral or good accompaniments that for the instant he hardly knew it for itself.”

Starbuck is absolutely certain that Ahab is leading the men to their deaths, that Ahab is destined to become “he wilful murderer of thirty men and more.” Starbuck can prevent that crime but only by becoming himself a criminal, committing mutiny or even murder. “A touch,” he thinks, and he “may survive to hug his wife and child again.”

Starbuck points the musket at Ahab’s door, and Ishmael writes that the mate “seemed wrestling with an angel.”

It’s not much of a spoiler to let you know that Starbuck doesn’t pull the trigger. But the question remains: was that the right thing to do?

“The Musket” is read by Nick Ryan. The accompanying image, Cape Apocalypse, Provincetown (2012) is by “Big Read” co-curator Philip Hoare.