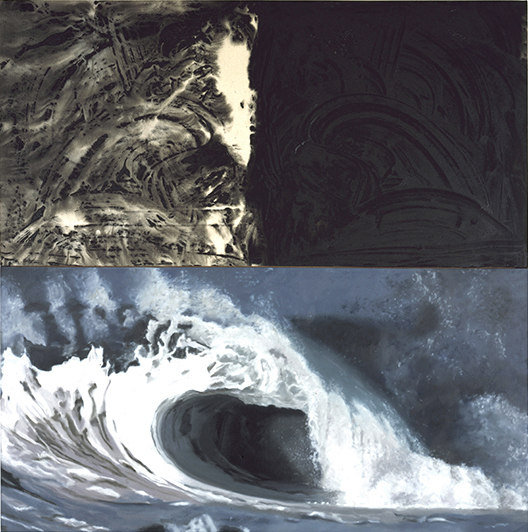 “The Candles” is a momentous chapter in the novel, a restaging of the ritual conducted in “The Quarter-Deck,” designed to get the crew to reaffirm the oath it has sworn to hunt down and destroy Moby Dick. Ahab takes advantage of an incident of St. Elmo’s Fire (referred to in the chapter by the term “corpusants,” short for corpus sancti) to make himself seem invested with almost supernatural powers.

As the chapter begins, the calm of the Japanese seas is broken by a typhoon, and Ahab’s whaleboat is destroyed. An omen?

Plus, as Starbuck points out to Stubb, “the gale comes from the eastward, the very course Ahab is to run for Moby Dick … the very course he swung to this day.” Yet another omen?

It’s as if nature itself is telling the Pequod to turn around, and Starbuck realizes that the very wind that threatens to destroy them if they press forward can be the wind that saves them if they turn around and head for home:

“Yes, yes, round the Cape of Good Hope is the shortest way to Nantucket,’ soliloquized Starbuck suddenly … ‘The gale that now hammers at us to stave us, we can turn it into a fair wind that will drive us towards home. Yonder, to windward, all is blackness of doom; but to leeward, homeward — I see it lightens up there; but not with the lightning.”

Just then, as if sensing this mutinous thought, Ahab appears on deck — and so does the lightning. Starbucks wants to order that the lightning rods be lowered, but Ahab refuses, as if he senses the opportunity with which he is about to be presented:

All the yard-arms were tipped with a pallid fire; and touched at each tri-pointed lightning-rod-end with three tapering white flames, each of the three tall masts was silently burning in that sulphurous air, like three gigantic wax tapers before an altar.

“Blast the boat! let it go!” cried Stubb at this instant, as a swashing sea heaved up under his own little craft, so that its gunwale violently jammed his hand, as he was passing a lashing. ‘Blast it!’ — but slipping backward on the deck, his uplifted eyes caught the flames; and immediately shifting his tone, he cried — “The corpusants have mercy on us all!”

The crew is “enchanted,” mesmerized by the sight of the masts lit up like “three spermaceti candles” (as Stubb puts it). Meanwhile, Fedallah is once again kneeling before Ahab, who now reveals the source of the scar that so transfixed Ishmael in the “Ahab” chapter:

“Oh! thou clear spirit of clear fire, whom on these seas I as Persian once did worship, till in the sacramental act so burned by thee, that to this hour I bear the scar; I now know thee, thou clear spirit, and I now know that thy right worship is defiance. To neither love nor reverence wilt thou be kind; and e’en for hate thou canst but kill; and all are killed. No fearless fool now fronts thee. I own thy speechless, placeless power; but to the last gasp of my earthquake life will dispute its unconditional, unintegral mastery in me. In the midst of the personified impersonal, a personality stands here. Though but a point at best; whencesoe’er I came; wheresoe’er I go; yet while I earthly live, the queenly personality lives in me, and feels her royal rights. But war is pain, and hate is woe. Come in thy lowest form of love, and I will kneel and kiss thee; but at thy highest, come as mere supernal power; and though thou launchest navies of full-freighted worlds, there’s that in here that still remains indifferent. Oh, thou clear spirit, of thy fire thou madest me, and like a true child of fire, I breathe it back to thee.”

Ahab’s scar, it turns out to be the result of a religious ritual, though — contrary to the expectations that Ishmael’s initial description created (with its images of crucifixion) — it is a ritual that belongs to the Zoroastrian rather than the Christian tradition.

In an article entitled “Cosmopolitanism and Zoroastrianism in Moby-Dick,” which appears in the volume The Turn Around Religion in America (edited by Michael Kramer and Nan Goodman), I’ve argued that Zoroastrianism is one of the wedges that the novel uses to crack open the Christian tradition and to promote a cosmopolitan perspective that sets it odds with mainstream nineteenth-century U.S. culture and indeed with U.S. culture now, at the beginning of the twenty-first century. For this reason, Moby-Dick is what I refer to as an emergent text: it represents set of cultural values that are “new” in comparison to the dominant cultural values of its time and ours. Paradoxically, it is, in part, its invocation of an ancient religious tradition that enables Moby-Dick to position itself in this way.

Many whalemen sailed from the Atlantic to the Pacific in Ahab’s day, but by worshipping as a Persian, Ahab, like a cosmopolite philosopher, crosses not only the physical but also the cultural gulf between west and east. At some point in his voyages, he has met Fedallah, who refers to himself as Ahab’s “pilot” (as we saw in “The Whale Watch“) and with whom Ahab has developed a relationship that remains mysterious to Ishmael, in part because it is not quite clear who holds sway over whom.

Ahab addresses “the clear spirit of fire” in a long monologue, marked as a soliloquy by the italicized stage directions that interrupt it. Starbuck, attuned to Ahab’s blasphemy, notices that Ahab’s specially made harpoon, still attached to his blasted boat, now burns like the masts: “from the keen steel barb there now came a levelled flame of pale, forked fire.”Starbuck takes this as an ill-omen and takes up the idea that he first broached to Stubb:  “As the silent harpoon burned there like a serpent’s tongue, Starbuck grasped Ahab by the arm—’God, God is against thee, old man; forbear! ’tis an ill voyage! ill begun, ill continued; let me square the yards, while we may, old man, and make a fair wind of it homewards, to go on a better voyage than this.'”

Ahab, however, is undaunted: he manages to manipulate the moment, to take control of this “preternatural” natural phenomenon and transform it into a ritual that enables him to remind the crewmen of the oath they have sworn to hunt down Moby Dick:

“All your oaths to hunt the White Whale are as binding as mine; and heart, soul, and body, lungs and life, old Ahab is bound. And that ye may know to what tune this heart beats; look ye here; thus I blow out the last fear!” And with one blast of his breath he extinguished the flame.

The crew is appalled by Ahab’s show of power, and Ishmael ends the chapter with a vivid image: “As in the hurricane that sweeps the plain, men fly the neighborhood of some lone, gigantic elm, whose very height and strength but render it so much the more unsafe, because so much the more a mark for thunderbolts; so at those last words of Ahab’s many of the mariners did run from him in a terror of dismay.”

“The Candles” is read by Provincetown musician Mary Martin, who plays the ukelele to accompany her reading.  The accompanying image is Wave (1997; acrylic and oil paint on canvas; 178×178) by Colin Crumplin.