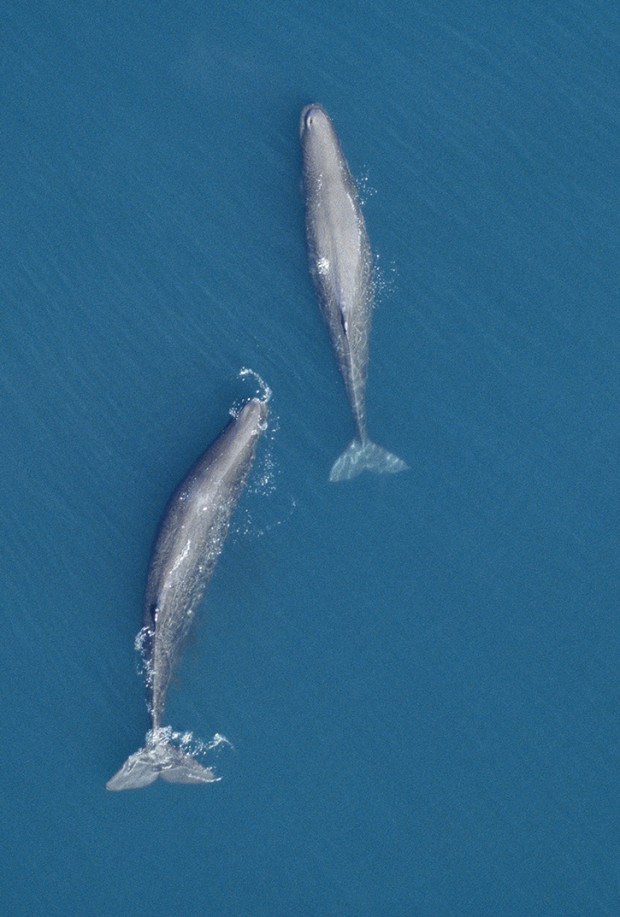 In this chapter, the “tyro” Ishmael has his first glimpse of a “remarkable” sight: “a whaler at sea, and long absent from home.” It is the whaleship Goney, covered with “hoar-frost,” its lookouts sporting ragged beards and tattered clothes after its three-year cruise. The name of the ship is the word that sailors once used instead of “albatross” for the large bird whose wingspans can reach 12 feet and about which they were deeply superstitious. Ahab attempts to speak to the ship’s captain as it passes close by under the Pequod ‘s stern, but it isn’t to be: “s the strange captain, leaning over the pallid bulwarks, was in the act of putting his trumpet to his mouth, it somehow fell from his hand into the sea; and the wind now rising amain, he in vain strove to make himself heard without it.” The crew marks this as an “ominous incident at the first mere mention of the White Whale’s name to another ship,”

As the ships began to drift apart, Ahab tries to deliver a message: “taking advantage of his windward position, he again seized his trumpet, and knowing by her aspect that the stranger vessel was a Nantucketer and shortly bound home, he loudly hailed — ‘Ahoy there! This is the Pequod, bound round the world! Tell them to address all future letters to the Pacific ocean! and this time three years, if I am not at home, tell them to address them to — — ‘ ” Ahab doesn’t finish — we readers we might mark the failure to specify an address as additionally “ominous” — because he himself notices something else that seems porentous, as “shoals of small harmless fish, that for some days before had been placidly swimming by our side, darted away with what seemed shuddering fins, and ranged themselves fore and aft with the stranger’s flanks.”

Ishmael notes that this behavior is quite common for these fish, but Ahab’s narcissistic monomania leads him to lend it significance: “Swim away from me, do ye?” he asks. “To any monomaniac man, the veriest trifles capriciously carry meanings,” Ishmael tells us. Ahab lives in a world full of signs, symbols, and portents. His way of seeing the world is not unlike that of the Puritans, who looked for signs of God’s design and intentions in everything.For example, in a journal entry dated 5 July 1632, John Winthrop describes “a great combat between a mouse and a snake; and after a long fight, the mouse prevailed and killed the snake.” Winthrop then writes that a “pastor of Boston” interprets the surprising victory of the mouse in the fight as an illustration of the Puritan people prevailing over Satan as they struggle to settle the New World.

Ahab, however, being “a grand, ungodly, god-like man” (as Peleg puts it in “The Ship“) finds malignity rather than grace wherever he looks. And Ishmael no doubt means for us to see this chapter full of portents as itself a portent. Calling it “The Albatross” rather than “The Goney” leads us to remember Coleridge’s famous poem “The Rime of the Ancient Mariner,” in which the title character is cursed after he needlessly kills an albatross that seemed to have helped his ship navigate out of Antarctic waters.The mariner is doomed to repeat his story to anyone he meets, as a way of doing penance. The mariner is described as “hoar” because it is white with age, and Ishmael uses the word “hoar-frost” to describe the outward appearance of the Goney.

In the final verses of the poem, the mariner offers a moral to the wedding guest who has been listening to his story:

Farewell, farewell! but this I tell
To thee, thou Wedding-Guest!
He prayeth well, who loveth well
Both man and bird and beast.

He prayeth best, who loveth best
All things both great and small;
For the dear God who loveth us,
He made and loveth all.

This view, of course, is opposite to Ahab’s conception of God. How much heavier Ahab’s burden, we might infer, because in his unbelief he wears around his neck not a white albatross but a white whale!