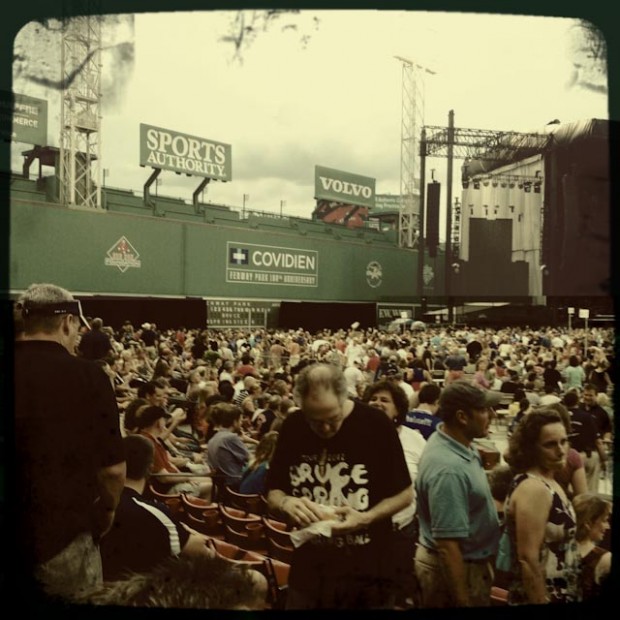 I came late to the Bruce Springsteen party.

The new album was okay, he said, but it wasn’t as good as the earlier stuff.

The year was 1978. The album was Darkness on the Edge of Town.

I didn’t care what he thought though. By that time I was already hooked. Because I’d already seen Springsteen live — twice.

I’d read about Springsteen’s return to the studio in one of the rock magazines that I read religiously at the time — Circus, Cream, Rolling Stone, I don’t remember which — and I bought the album as soon as it was released. A friend managed to secure tickets — on the floor! — for one of the concerts that was scheduled for Madison Square at the end of the summer.

Meanwhile, while visiting some cousins in Charleston, South Carolina, in July, I noticed that Springsteen was scheduled to play at the Gaillard Municipal Auditorium in town on August 1. So I bought the cousins a copy of the album and convinced them that we should go. Although the Garden shows were long sold out, there were plenty of seats available for Gaillard, and we ended up in the front row of the mezzanine. It was a small auditorium, and Bruce seemed so … close — particularly when he was climbing up on the speakers. Looking around Madison Square Garden a few weeks later, I was amused to remember that the Charleston show hadn’t even been sold out. A review the next day in the Charleston claimed that it was standing-room only, but that’s not how I remember it.

I’ve looked in vain for a bootleg recording of that show, and the only set lists I can find online are sadly incomplete. But I’m pretty sure I remember the show opening with a cover of “Summertime Blues” segueing into a rousing rendition of “Badlands,” and a powerful version of “Jungleland” to close out the first set. Then, after a brief intermission, the band returning with “Paradise by the C.” The review that’s posted to the “Brucebase” site doesn’t mention any song titles, but the writer’s description of the atmosphere in the hall was dead on:

Springsteen’s appeal really is less musical than evangelical, both in the sentiment and spirit of his lyrics and in the production values of his stage show, centered on Springsteen as throaty vocalist, effective guitar soloist, and as commanding stage presence — prone on the stage, prancing into the crowd, jumping atop the piano, but always the focus of action. … Like a gifted revivalist, he played the rippling energy currents in the mobbed hall with precision, producing outbursts of applause and howls of enthusiasm at will.

“I’m just a prisoner of rock ‘n’ roll,” Springsteen used to bellow at the end of his shows, but even then it occurred to me that he was also its prophet.

One of my few regrets about spending the past academic year in Abu Dhabi was that it seemed impossible for me to catch any of the dates on Springsteen’s Wrecking Ball tour. Driving around Abu Dhabi, I’d grown to love the album, which draws on a number of different American folk and pop traditions as it offers up a bitter indictment of America’s failure to live up to its promises. It was a relief to find that i loved the album, actually, because I’d felt lukewarm about his two previous efforts, Magic (2007) and Working on a Dream (2009). To make matters worse, our summer travels would take us to Springsteen country during the second half of August, as we’d be spending two weeks on  Long Beach Island on the New Jersey shore, not too far from Freehold where Springsteen grew up and Asbury Park where he began to make his name.

And then my wife told me, first, that Springsteen had added a show at Boston’s Fenway park during those two weeks and, second, that I had her blessing to go.

I couldn’t resist. I’d seen Springsteen more than once in the Boston area. The River (1980) came out during my sophomore year in college, and my buddies and I had camped out outside the Out-of-Town News Ticket Agency in Harvard Square in order to get seats to two shows at Boston Garden in December. Hearing that album can still make me recall the sights and sounds of college with great vividness. (I couldn’t believe my luck when it turned out that the Madison Square Garden show that my wife and I attended in 2009 was the one in which the Springsteen and the E Street Band played that album in its entirety.)

Later on, I’d seen him twice (1988 and 1992) at the Centrum in Worcester, Mass, and then at Boston’s Fleet Center in 1999 — the E Street Band’s “reunion” tour — when my wife saw him for the first time and understood what all the fuss was about. We’d managed to get these amazing seats through an obscure, alternative Ticketmaster phone line — and the seats were in the loge not far from where Bruce’s kids seemed to be sitting.

As much as possible, Springsteen’s tours became a part of our lives: we saw The Rising tour at the Meadowlands and the Seeger Sessions tour at Madison Square Garden, and when we saw the Magic tour, we said to ourselves that spending a night at a Springsteen concert felt like spending the evening at a reunion of old friends.

For me, listening to Springsteen’s work through The River, like listening to the Rolling Stones albums from Let It Bleed to Some Girls, puts me back in touch with my younger and more vulnerable years. But as I grew older and became interested in other things — in my work, American culture and politics, and in my personal life, raising a family — it  was great to listen to Bruce’s music evolve in similar ways. His work continued to be relevant as both he and I grew older. The Rising was a great album. And so is Wrecking Ball.

Live, Springsteen and the E Street Band remain almost as compelling as they were in 1978. “Almost” because there’s something a little bit mannered in his act today inevitable, perhaps, given the complexity of mounting stadium shows today. He doesn’t tell those great extended stories about his life so much any more. But, above all, because Clarence Clemons, the “Big Man” who was Bruce’s onstage foil and whose melodic saxophone solos were an iconic part of so many of Springsteen’s best songs, is on longer with us. We missed Danny Federici in 2009 (he’d passed away from melanoma the year before), but it’ll take a lot longer to get used to the idea of the E Street Band without Clemons. Some of the old friends aren’t around any more and from now on the reunions will be about honoring the dead as well as celebrating with the living. In rock ‘n’ roll as in life.

It was fitting to have Clemons’s nephew Jake, also a saxophonist, be part of the band, and because Clemons’s forte wasn’t improvisation but rather melody and tone, most of the signature solos were there — at least the melodies and the notes. But Jake doesn’t quite have the tone yet, the urgency of his uncle at his best. (Truth be told, Clarence mostly didn’t have it either in his final years.) It was a wise decision to take some of the pressure off by having Jake be part of a big brass section, but on both nights the crowd seemed to be pulling for him, not just in recognition of what his uncle meant to the band, but also in recognition of how difficult it would be to be put in Jake’s position. 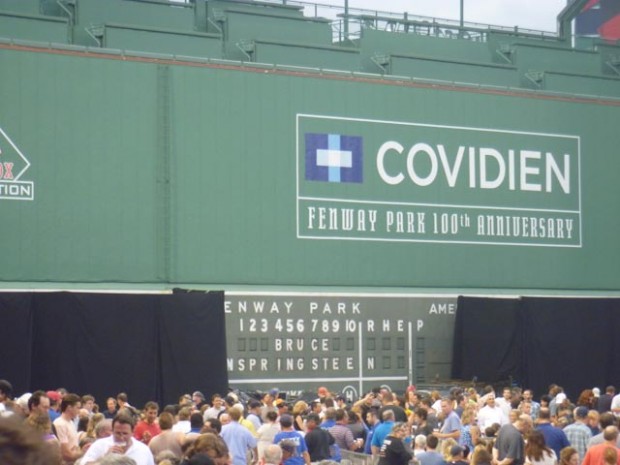 I was glad to be able to persuade one of my college buddies to join me for the first Fenway show — I hadn’t seen A. in more than a year, and he hadn’t seen Bruce since we were at Worcester together in 1992 — so the reunion aspect of the evening was palpable. Bfuce opened with Promised Land, the band’s robust sound filling the stadium as the light started to die. The new songs sounded great and so did the old ones, and there were some unexpected treats: “The E Street Shuffle,” which I’d never heard live; a cover of Johnny Lee Hooker’s “Boom Boom,” an audience request; a moving tribute to Clarence during “Tenth Avenue Freeze-Out” (moments of silence after the line “big man joined the band,” when the video screen showed pictures of the saxophonist with the band over the years); acknowledgment of the passing of Red Sox great Johnny Pesky the day before (and we happened to be sitting pretty much right next to the right field foul pole known as the “Pesky Pole“; and finally covers of “Dirty Water” and “Twist and Shout” to end the show. 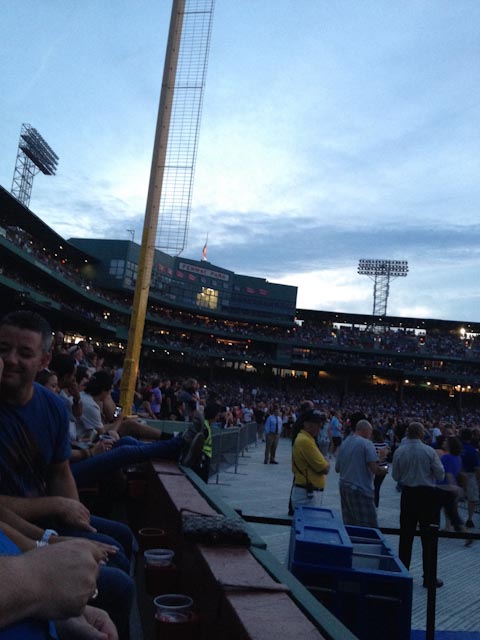 The next night, I was alone with Bruce and the band, a full stadium of fans, and memories of 1978. For some reason, the set list included a number of songs I’d heard during my first two Bruce concerts: “Summertime Blues,” the Detroit medley, “Quarter to Three,” “Because the Night,” and — an audience request — the 1978 concert version of “Prove It All Night” with the long piano and wailing electric guitar intro. There was an extended audience request section of the program, and I heard four songs I’d never heard live before: “Knock on Wood,” “Does This Bus Stop at 82nd Street,” “Thundercrack,” and “Frankie.”

So what if it started to rain during “Waitin’ On A Sunny Day” about two-third of the way through the concert? When the final song — “American Land” — was done, it was nearly 11:00 p.m., and the fireworks — so well-timed to coincide with “Twist and Shout’ the night before — seemed like almost an after-thought, going off after the band had left the stage. There’d been plenty of musical fireworks already.

I’ve come to think of “Bruce” as something of a metaphor, not just a rock’n’roll singer whose music I love, but rather a part of my history from 1978 to now, a series of songs and nights that I’ve shared over the years with friends and with my wife and hope still to share some day with my kids. Next two me on the second night were a mom and her teenage son dancing around and enjoying the music and the night together. 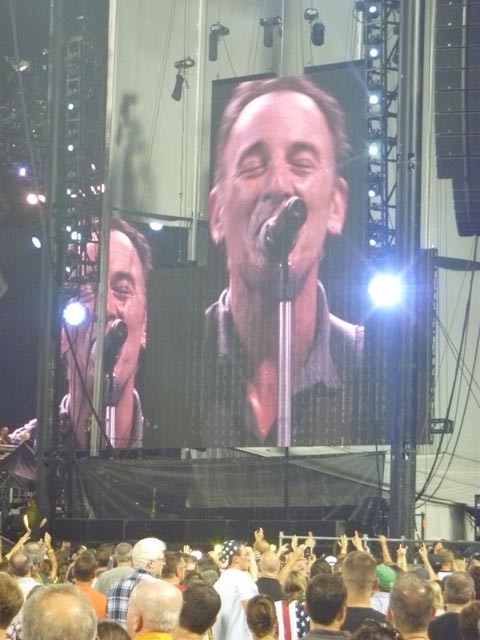 The Springteen party is still going strong. Turns out I wasn’t late at all. Turns out you can show up even now and not be late. Because Bruce Springsteen and the E Street Band still give the best rock show around (even if, these days, the attendees are mostly not teenagers but the parents of teenagers). At the conclusion of “Quarter to Three,” Bruce yelled out that line which he’d probably yelled the first time — 34 years ago — that I’d heard him play the song: “I’m just a prisoner of rock’n’roll.” 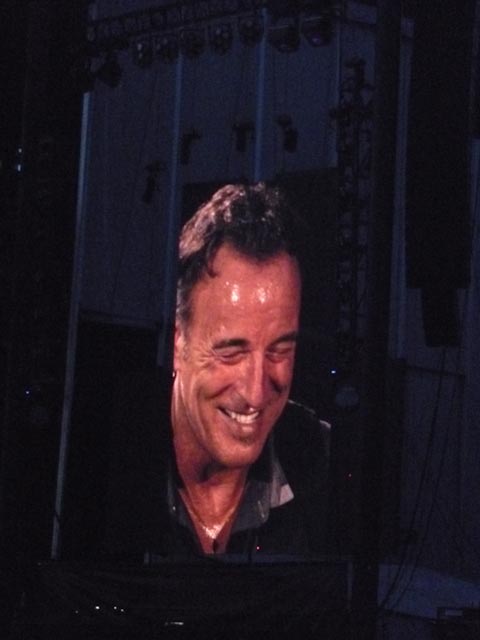 Review of the first night in boston.com.

Review of the first night in wickedlocal.com.

Review of the second night in wickedlocal.com.

And this excellent profile piece in the New Yorker by David Remnick, which puts a number of things in perspective.