Africa Journal (I) – The Norfolk

One of the wonderful things about living in Abu Dhabi is its relatively proximity to places that are pretty remote if you’re living in New York. We’ve been lucky enough to do quite a bit of traveling in the past few months. My older son went to Ephesus in Turkey with his class at the American Community School just a few weeks after we arrived in Abu Dhabi, and I’ve gone to conferences in Lebanon and Australia. As a family we’ve traveled to India, Oman, the Maldives, and most recently Africa.

My wife, Deborah, has wanted to go to Africa for a long time, probably ever since she saw the film version of Out of Africa (1985). She does a fair impression of Meryl Street playing Karen Blixen and delivering the iconic line: “I had a farm in Africa at the foot of the Ngong Hills.”

So, earlier this month, we left behind the heat and humidity of summer in Abu Dhabi and traveled to Kenya to go on safari. Kenya lies at the equator, so July and August are the coolest and driest months of the year. Our itinerary, arranged by Melanie of &Beyond Africa, would take us to Nairobi for a brief overnight stay, then to Amboseli National Park in the shadow of Mt. Kiliminjaro for three nights, followed by four nights at the renowned Kichwa Tembo Tented Camp in the Masai Mara National Reserve. With luck, we would catch the beginnings of the spectacular wildebeest migration that takes place each year, in which over a million wildebests and other grazing animals travel north across the Serengeti to the Masai Mara. In addition, I was hoping that the trip would give me insights into Ernest Hemingway’s African writings, which are the subject of one of the chapters in my current book project on cosmopolitanism and the literary imagination.

After a four-and-a-half hour flight, we emerged in Nairobi to what felt like early fall in New York: highs in the low 70s F, lows in the 50s. As we drove away from Jomo Kenyatta International Airport, however, it was clear that we were still half-a-world away from New York City. Just one example: in lieu of the ubiquitous pigeons of New York, Nairobi has cranes sitting atop its lampposts and in its trees. The scenes outside our car reminded us more of another city that was once the capital of a British colony: Delhi, which we had visited in the fall. 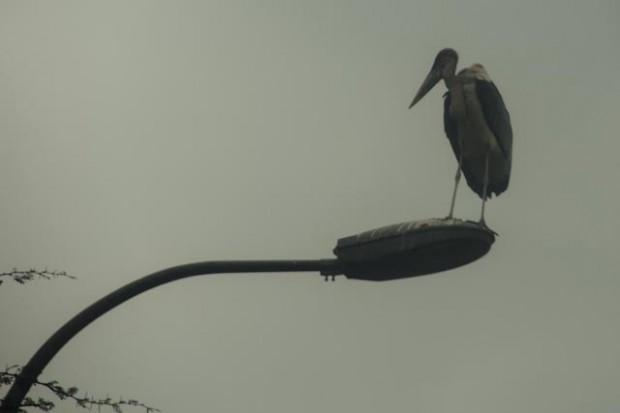 Melanie had booked us into what turned out to be the oldest and most famous hotel in Nairobi, the Norfolk, which had opened its doors on Christmas Day, 1904, when Nairobi was a small town in what was known as the “East Africa Protectorate.” The hotel, now part of the Fairmont chain, exudes an atmosphere of British colonialism, though now, apparently, its location is less central and less safe than in days past. Security at the entrance is tight, but once inside, you are transported to a by-gone era. The buildings surround a central courtyard, which contains such artifacts turn-of-the-century horse-drawn buggies, an early-twentieth-century tractor, and a Model T. My wife had hoped to visit the Lingata Giraffe Centre, but it was mid-afternoon by the time we arrived at the hotel, and we’d learned in the fall that our children have little interest trooping around the capitals of former British colonies. On seeing the Norfolk, we abandoned any ambitions of exploring the city and decided to soak up the old world atmosphere instead. 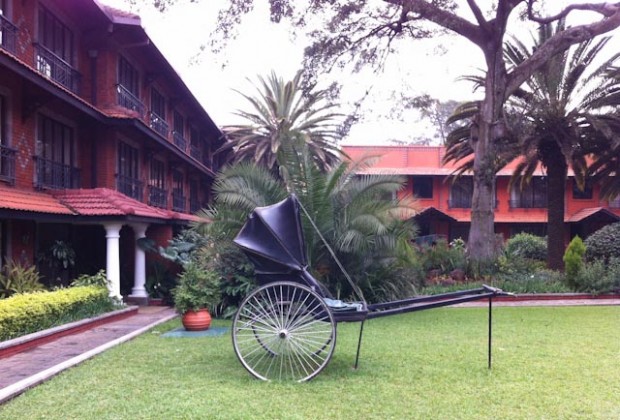 Sitting on counter at the main desk was a well-thumbed copy of a book entitled The Norfolk: The Hotel That Built a Nation by Stephen Mills, a former RAF pilot who is presently the head of a multinational credit bureau and debt management firm headquartered in Nairobi. Full of wonderful historical photos of the hotel and its environs, it’s a heavy book – too heavy, I thought, to tote around given the constraints of the small planes we’d be flying in the coming days (weight limit 15kg per person in non-hardsided luggage). Luckily, it was available for order online from the publisher and was waiting for me on my return to Abu Dhabi.

Nairobi isn’t one of those cities that’s built on the edge of an ocean or a lake or by a major river, though it is close to a network of rivers. Mills’s book gives a vivid account of the founding of the city, which was located on the site of a railroad depot. In fact, in the early days of its African colonization, the British Empire was primarily interested in its Uganda colony and the East Africa protectorate was important primarily because it was the territory through which a British-built railroad would convey goods from Uganda to Mombasa on the coast. The original town was built on what was basically a swamp and had to be razed and rebuilt in 1903 after an outbreak of bubonic plague the previous year. Kenya became a colony at the end of 1920 and achieved independence in 1963.

By all accounts, Nairobi grew too fast after independence, and today it has a reputation for being a violent, crime-ridden place. What we saw as we were driven around supports the Lonely Planet’s assertion that “almost all of the colonial-era buildings were replaced by concrete office buildings” in the name of “modernization.” Indeed, the pool at the Norfolk is overshadowed by just such a building. The city’s violent past includes not only the the bombing of the US Embassy in 1998 by al Qaeda, but also the bombing of the Norfolk itself by an Arab extremist on New Year’s eve of 1980.

For us, however, a night at the Norfolk was a delightful experience. We had a mid-afternoon refreshment at the Cin Cin Room overlooking the courtyard and dinner on the terrace, which is named after the Rt. Hon. Lord Hugh Cholmondeley, 3rd Baron Delamere (1870-1931), who had been granted 100,000 acres on a 99-year lease outside Nairobi and was a champion of settler interests and white supremacy in East Africa. He was a charismatic figure, apparently, known for his fluency in the Masai language and for wild parties. We learned from the Lonely Planet that Lord Delamere once “rode his horse through the dining room” of the Norfolk, “wooing dinner guests with his ability to leap over banquet tables.” 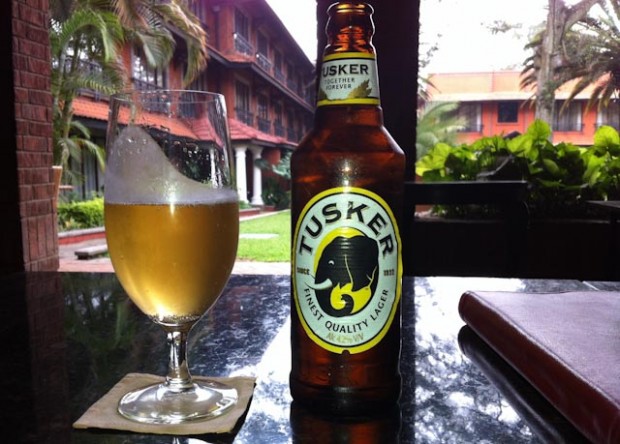 I later read in one of the magazines on board our Air Kenya flight from Masai Mara back to Nairobi that you haven’t really visited Nairobi until you’ve taken a meal or tea on the Lord Delamere Terrace at the Norfolk. In our case, it’s turned out to be something of the reverse: we’ve eaten at the Delamere, but we haven’t really visited Nairobi. Much as we liked the Norfolk, for our next trip we may try to stay at the Giraffe Manor. Perhaps we’ll even try to reserve the Karen Blixen room!